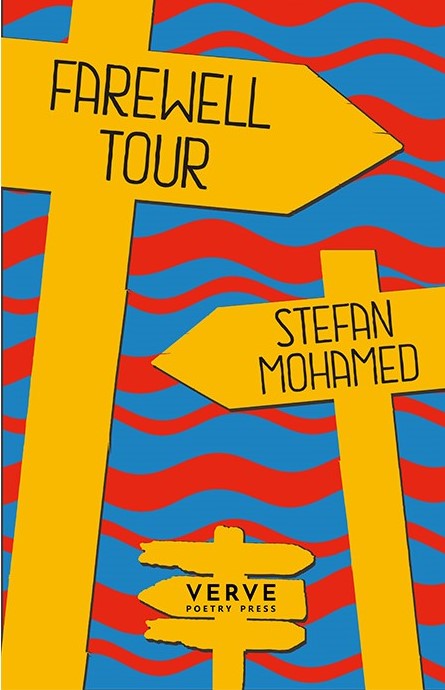 As an older person, Stefan Mohamed’s state-of-England collection, Farewell Tour, makes me feel a bit damned-if-I-do-damned-if-I-don’t. I could come over all huffy at casual dismissals such as the one about “interminable/side quests in which we helped old men find their/favourite saucepan or whatever”, and poems about retirement communities (“This is my cage/violently won/and I will dismantle/all intruders”) that simplistically parrot easy stereotypes of people my age, which would be unacceptable if targeted elsewhere. Alternatively, I could applaud Mohamed for being refreshingly unapologetic about his not unjustified anger with his elders. Fury at the old – proclaiming, in time-honoured fashion exactly where my lot went wrong – is, after all, youth’s job description. But then I’d be accused of patronising him.

The premise of Farewell Tour is a road-trip across a parody of England, ending at the coast “where you will park the car/and with much ceremony/hurl yourself into the waiting arms of the sea.” The participants are mysterious. There’s someone who narrates in the second person, plus companion/companions referred to as ‘they’. Although their interactions seemingly become less abrasive as the collection progresses, these two communicate mostly by arguing: “You are having another stupid argument”/“You are having another exchange of views”/“You are sparring, fondly, over pints”. Are they Leave and Remain? The UK and the EU? Youth and age? Time past and time present? Are their identities even important? No, says Mohamed: “It doesn’t matter. Who you are, what scars or supplies you bring to the table…Just the journey and the land”.

The journey, when it gets under way, takes a route through a land of almost-believable comedy place-names such as Marmite County, Big Bungle, Pissing and Thwacking. This is an England of high tea with curdled milk and twee-ness with a hangover – nightmarish, hallucinatory and dense with allusion, not all of which – I’ll be honest – I readily understood. I don’t think that’s too important; writing that unpacks the best of its treasures only as reward for close engagement is fine by me. In any case, the broad message is unmistakeable: almost everything the road-trippers encounter – tabloid headlines stuck in the 1980s, gossip mags, TV sitcoms, transphobia – is the province of the old. This is a country paralysed by an agenda wholly dictated by their obsession with the past and the debased cultural narratives that keep it contemptuously alive. No wonder the young feel alienated. No wonder Mohamed is furious.

The narrative voice is varied by a fair few list- and semi-list poems. ‘Traditional Pub Menu’ is amongst the most scathing, serving its insular plates of embittered grudge in deliciously elegant tasters: “Colonial hooligan bantering on a bed of redacted wince…World cup, with your choice of world wars…Hard border stewed in damp class system…”. The most contentious inclusion is probably “Toasted poppy, served with poppy-fried poppy and fizzy poppy cordial”; and as the offspring of a Normandy combatant, I should perhaps number myself amongst the outraged. But I don’t. While I respect the sacrifices made by my parents’ generation, the artist has every right to question the present-day purpose of even this most sacred of cows. And anyway, perhaps Mohamed’s reference is actually to the poppy’s soporific qualities; his accusation, that we are a nation wilfully slumbering.

If a ghost could be said to haunt these pages, that ghost belongs to William Shakespeare, whose panegyric to the jeopardised (possibly mythologised) England of Richard II is summoned repeatedly. John of Gaunt’s deathbed paean to “This other Eden, demi-paradise,/This fortress built by Nature for herself/Against infection and the hand of war” may reflect in Mohamed’s cracked mirror as “this eccentric space/this haunted, haunting, cursed and curing isle/frozen mid-decay”; but the implication, perhaps, is that buried beneath the garbage, there is something worth saving. Shakespeare remains an inspiration and a lodestar for literature in English to this day. The same point is made by the delicate and very lovely sonnet that is the collection’s concluding poem.

In reality, you can’t generalise about a group as large, diverse and ill-defined as ‘the old’. Perhaps Mohamed just means those ageing Conservative Party members who recently lived out their turgid fantasies by foisting Liz Truss upon us. I share his frustrations. Because he doesn’t mean me of course. I voted remain.

Farewell Tour is available to purchase online, direct from publisher Verve Poetry Press, as well as other bookshops and retailers.