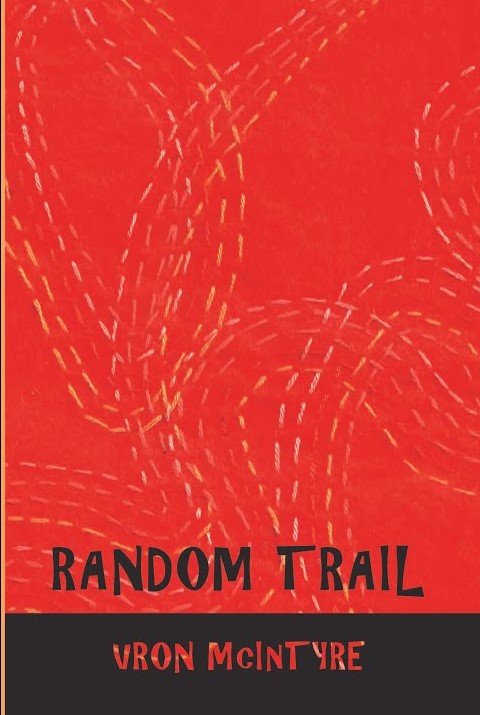 Vron McIntyre’s 2021 collection Random Trail is a tale of shifting perspectives. In ‘Patterns’, the opening poem, McIntyre wonderingly describes their childhood self, obsessed with how things work, as being “so sure it was patterns,/patterns through and through”. But despite their declaration that this mindset continued until a sudden, unexplained reorientation at age forty “when all patterns fell apart,/and there behind the patterns,/the stunning, random beauty of what is”, the process documented here feels more gradual. Magic, for example, the mystical-elusive concept that gathers importance in the second half of the book, is already foreshadowed while McIntyre is still in thrall to mechanical engineering: “times tables, magic chanted, periodic tables, enchanted/by neatly ordered sequences of each same small part/producing difference”.

In ‘Glorious Green Jumper’ meanwhile, the tension between order and predictability and something freer is evident in McIntyre’s awe-struck detailing of their mother’s treasured garment “Open work/pattern in front, knit large, plain stocking stitch/behind but no one could call this plain” which later on is riotously donned for “every teenage gig: rock, punk, new wave,/it pogoed with me, always the first one on the floor”. Later still, ‘Twelve months’ retains the conventional structure of a calendar but with each month captured as a mood or essence. March, for example, is “A month called Magic/Time quickens, tips, sparks strike in the mind./Another labyrinth beckons”.

The synthesis continues in ‘Ghosts’, where McIntyre returns to the idea of a different reality existing behind or beneath surface organisation – “Our lives sit lightly here on top of land/which thinks it’s still unfurrowed fields”; and again in ‘While Housebound in Upstairs Flat’. Here, a puddle left by overnight rain is magically reimagined as “an opening to another world/a glorious shining chasm below”. Elsewhere ‘The Heart of Things’, part of a series of nature poems, also reprises ‘Patterns’ by expanding on the idea of that which ‘just is’ and linking it to the afterwards-recurring concept of unknowable essence: “here at the heart of things/the wordless mystery that seeks/no answers, not even questions/it just is”.

One explanation for the sense of gradualness in the collection’s search for the sweet spot between science and magic is that it is superimposed on the deeper structure of McIntyre’s biography. Integral to this is a touching portrait of their relationship with their parents, beginning with Dad patiently explaining to an endearingly serious and thoughtful child the intricacies of the domestic plumbing system, and moving on to the generosity of a Mam condemned by her own trauma to a life of eternal worry but still “let[ting] us go our own way,/peppered with advice and admonitions as we went/she wanted us to be freer than she had ever been”. (The aspect of Mam’s generosity that impressed me almost as much – how in God’s name she was persuaded that her precious green jumper would emerge unscathed from the seething mosh of an average punk gig – is left disappointingly unaddressed.)

Amongst these poems of life and growth, two that stand out for me are ‘Goodbye Tomato Juice Cave’ – a menopause poem if ever I saw one – and ‘Old Religion’, which while it seems to be an earlier-life companion piece to ‘Tomato Juice Cave’, is considerably more opaque. Part of a gang of children on a mission to explore forbidden corners, McIntyre climbs up to the high window of an abandoned chapel, and looking in sees “one mysterious netball hoop/in a large empty cobwebbed space/ancient relic of some old religion.” It’s not clear if this intriguing poem is a rejection of sex, a rejection of the conventional female body, a queer sexual awakening… or something else entirely.

Random Trails is a sincere memoir of one person’s quest for an understanding of the world and their place within it. Its logical, careful structure and at-times slightly sensible tone arguably betray that McIntyre has never completely escaped their deep-seated desire to impose order – it’s interesting that the word ‘chaos’ is never used; but they have also been open to change, and brave enough to adapt. By the end of the collection, tempered with other influences and experiences, patterns have become just one part of a rounded, balanced and perhaps more humble world view.

Random Trail is available for purchase (signed or unsigned) here, directly from the author.