The Cork-Coventry Poetry Exchange returned for its tenth year in August to celebrate the budding talent of its participating poets, a mutual heritage rich in poetry and arts, and the flourishing friendship between the twin cities. Coventry poets, Aysar Ghassan and our very own Raef Boylan, Lead Editor at HCE, travelled to Cork (Republic of Ireland) on the 5th of August to participate in poetry nights, explore the city and its surrounding region, and meet the Deputy Lord Mayor of Cork, Dan Boyle, as a part of the on-going programme.

After arriving, Raef and Aysar met with Stan Notte, a poet who came to Coventry in 2017 for the exchange, and caught up with him over coffees before dropping their bags off at Handlebars B&B and going on a quick tour of Cork City Centre. They were surprised by how much the city resembles continental Europe, with its very own river, the River Lee, running right through it, its rustic coffee bars, and interesting side streets everywhere. Not many cities can boast of having a city centre that floats upon a mini inland island, formed by a fork in its very own river, which is only accessible by bridge. The guys were due to perform later that night at Ó Bhéal’s weekly poetry event at The Long Valley pub, so they made their way back to their B&B where they practised before heading back out. The biggest challenge of their stay presented itself to them then: finding the venue. Could they do it? They eventually did, even though the odds were against them (map-reading was lost on Raef, and Aysar’s GPS kept fibbing) make it to the pub. Albeit a bit late, but they were there, and performances had yet to begin so all was well. 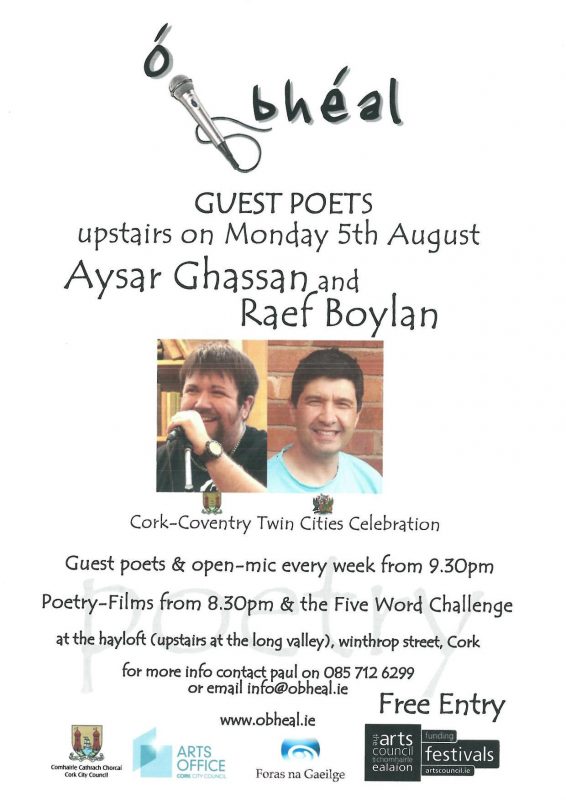 With gigs in Ireland tending to start and go on much later than the average UK gig, it meant that Raef and Aysar weren’t due on stage until 10pm, despite it being a Monday night and the end of a long bank holiday weekend. So, that gives you some perspective of how different things are in Ireland to here. Poetry films played on the big screen for the first hour, and then came the ‘5 Word Challenge’. People called out suggestions for words, were given 15 minutes to come up with a story or poem including all five of them, and then went up on stage to read out what they had written. The responses and creativity from the crowd were impressive, as was the participation and inclusivity of the event. Even the Deputy Lord Mayor of Cork, Dan Boyle, who attended the poetry night as a part of the twin city celebration, surprised the guest poets by writing and reading out a piece. Finally, the time came for Raef and Aysar to go up on stage. They took their turns, each performing a 20 minute set of poetry and receiving applause for their endeavours, and then it was open mic to finish off with. It was nice to receive so much support from Cork’s crowd. Afterwards, they were accompanied by Cork poets Ben Burns and Shaunna Lee Lynch to Arthur Mayne’s, a 120-year-old pharmacy, now converted into a pharmacy-themed wine bar, candle-lit with cabinets reaching up to the ceiling, decked with vintage pharmaceutical paraphernalia, where they talked about music, poetry, and of course, Brexit. 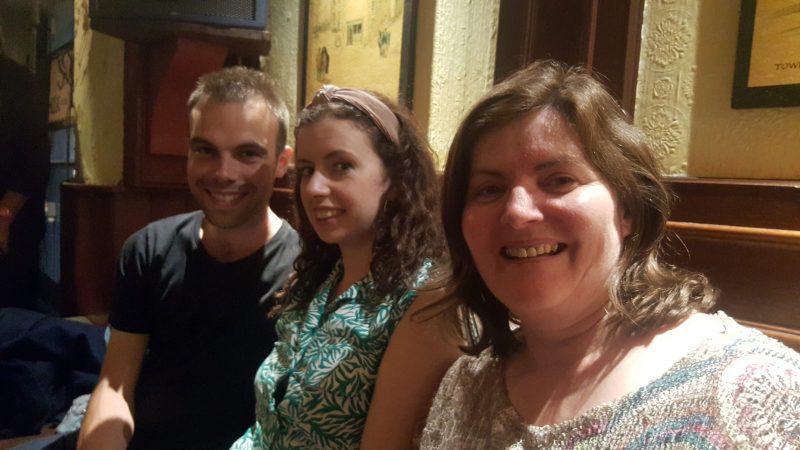 The following day was just as busy. Raef and Aysar, alongside Shaunna and Stan, met with the Deputy Lord Mayor once again, this time at Cork’s City Hall. They were given a tour of the Lord Mayor’s chambers and then joined Dan Boyle for coffee and a chat. There was lots of talk about music and poetry, and the differences and similarities between Coventry and Cork, Ireland and the UK; to our poets’ relief, also not too much focus on past political conflicts amongst our countries. It was an all in all pleasant visit and Raef and Aysar felt very welcomed. Next they went to Cork’s ‘English Market’ for lunch, which was bustling with business, and then onto a church which had been turned into an art gallery and cinema.

The second gig they were to be performing at was later on in the day, an hour’s drive away from Cork, in a beautiful town called Clonakilty, with a high street full of independent shops and blooming hanging baskets. The Psoken Wrod poetry event had a last-minute change of venue and was held instead at Shanley’s pub, which inspired some nerves in Aysar and Raef. They feared the regular punters may not expect or want spoken word poetry to be going on, but the pub garden was so tranquil to sit in that it soothed their nerves. As did the many people who turned up for the gig, especially the familiar faces from the Ó Bhéal gig the previous night, who had turned up to show their support. Before they knew it, Raef and Aysar were up performing their pieces. The support from the crowd was incredible – you could tell they were enjoying themselves. Following their performances, our poets participated in Psoken Wrod’s special feature, a live interview. Although they were nervous, Moze Jacobs, the host, kept the interview short and informal for our poets, and it turned out quite nicely. Afterwards, the stage was free to be taken by open mic poets, who equally blew Raef and Aysar away. As well as readings and performance poetry, there were also storytellers and people who blended poetry with music. It was a real centre for creativity, and a really fun and memorable night for them both. 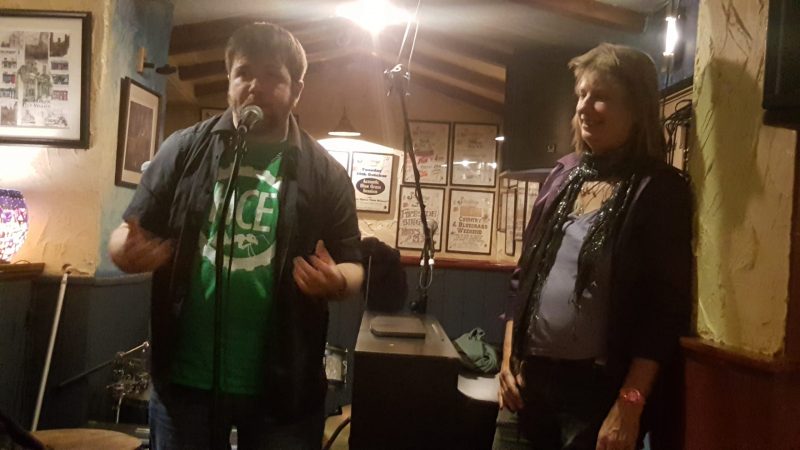 Wednesday the 7th was a lot more relaxed. Our poets were due to be returning back to the UK later that evening so there was nothing planned for the day. They could finally do some independent exploring and let themselves get lost in the city – as long as they didn’t get too lost, they had no worries. Raef and Aysar bought souvenirs and eventually ended up at Crawford Art Gallery, a building which is as beautiful and prestigious outside and in as the staggering exhibitions it houses. Both guys were amazed by the art and were glad they ended up there. The final stop was Le Chateau Bar, which had a sign outside claiming to be home to the ‘Best Irish Coffee’. It truly was. Stan met Raef and Aysar there and then drove them to the airport. They said their farewells, to both Stan and the city, which had given them a wonderful few days, and then they were homebound.

Cork poets Ben Burns and Shaunna Lee Lynch will be coming to Coventry later this year in November as the second part of the exchange. They will be set to perform at Fire & Dust, a monthly poetry night compered by Raef, at The Big Comfy Bookshop in Fargo Village. Join us in our celebration of poetry and each other, to see what the exchange is all about! 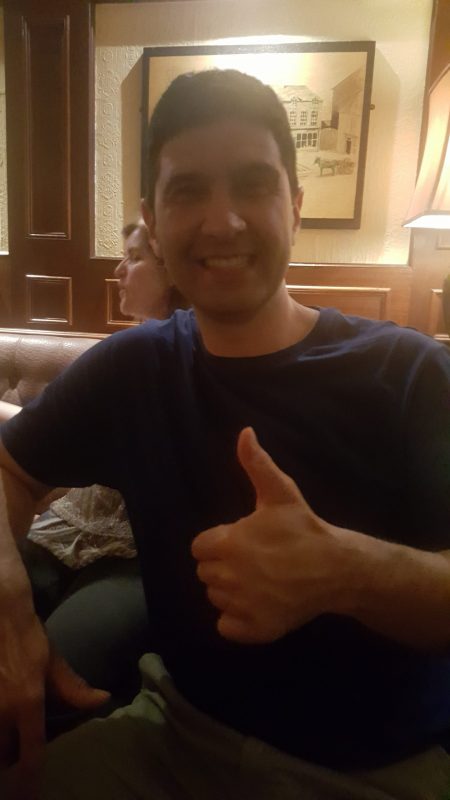 Aysar Ghassan was born in Iraq and has been living in Coventry for the past six years. He tends to write about relationships and contemporary issues, and although he is very skilled at being wittily evasive – that’s what the hosts in Ireland said, as they couldn’t find much on him! – we have managed to gather some facts. And they’re pretty impressive. His poems have been published in HCE, Critical Survey, and by University of Leicester’s Centre for New Writing, to mention a few. In 2016, he was commissioned by Centro to narrate experiences of travelling on public transport and his poetry appeared on West Midlands public transport in the spring and summer of that year. Aysar was shortlisted in the Leeds Peace Poetry Competition, 2018, and has remained a poet in residence at Leamington Spa Art Gallery and Museum as well as Herbert Art Gallery and Museum, Coventry. He also enjoys participating in spoken word events and has read at festivals, such the Godiva festival, and on Radio Plus too. 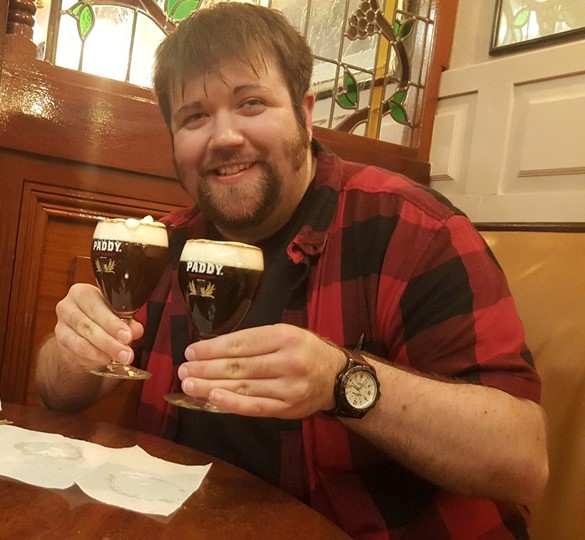 Raef Boylan is probably the humblest man you will ever meet and is just as impressive as Aysar. He was born and bred in Coventry and has encouraged growth in the local literary scene by organising regular Fire & Dust poetry nights in Fargo Village. He mostly writes poetry for page and performance as well as short stories, focusing on social realism, with work that has featured in Palimpsest, StepAway, and other such publications.  He won first prize in the CU Short Story Award and in the inaugural Frederick Holland Poetry Collection Award and has also been shortlisted for The Big Issue Short Fiction Award. He lectures in Creative Writing at Coventry University, alongside his position as Lead Editor at Here Comes Everyone and being a member of the volunteer team at Coventry-based publisher Silhouette Press. In 2018, he headlined at the Positive Images Festival and Pure & Good & Right.