REVIEW: VICTORIA KENNEFICK’S ‘EAT OR WE BOTH STARVE’

REVIEW: VICTORIA KENNEFICK’S ‘EAT OR WE BOTH STARVE’ 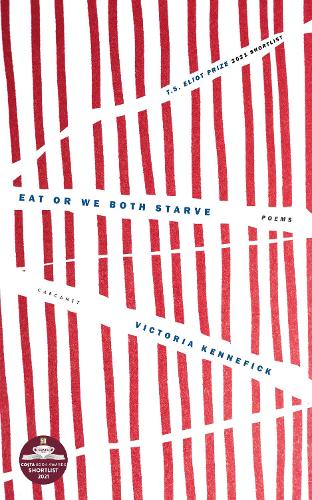 You’d be surprised how popular Audrey Hepburn is among women. I’ve had beauty treatments (all right, laugh if you must) in a room wallpapered with teasing Audreys; and my former hairdresser loved her so much I gave her a book about the gamine goddess for Christmas. From the final poem of Victoria Kennefick’s 2021 collection Eat or We Both Starve, it’s clear that it’s a passion she also shares. It’s also one she questions. These are poems that cover many themes including Irish history, grief, and growing up in a family that exists only because your father’s first wife passed away. But at its heart, Kennefick’s concern is with the relationship between consumption, control, the Catholic church (Kennefick writes from the cultural perspective of Irish Catholicism) and the impacts of internalising the ‘ideal’ female body.

Her very title hints at complex psychological manoeuvrings: unless you eat the food I have prepared as a token of my love, but which I am too morally superior to eat myself, my death will be your fault. ‘Hunger Strikes Victoria Kennefick’ perhaps best encapsulates this doublethink, sliding between “To eat or not to eat…Stuff cheese sandwiches/and chocolate blocks into a wide/moist orifice. Or, alternatively/zip that mouth closed like a jacket”, before culminating in a (faux?) anguished wail of “But I have set a table for us all!”, which then subtly switches from first to second person “Let’s take a seat, eat our fill./You know you want to./Dig in.”

‘Hunger Strikes Victoria Kennefick’ is the last in an interspersed cycle of ‘Hunger Strikes…’ poems about women venerated as saints by the Catholic Church. The point Kennefick is making, I think, is that throughout history, women have taught each other to use self-denial to combat male control while seeming to collude in it – in this case, retaining the admiration of the church hierarchy while simultaneously rejecting its decrees of marriage and motherhood. But the whiff of moral (and possibly sexual) superiority over other women is also detectable: in ‘Hunger Strikes Catherine of Siena’, the saint says she “only ate His body; the others did not/understand how good it was/to kiss his holy prepuce”.

This idea of women consuming each other (and themselves) to create their identity is also apparent in the collection’s main trajectory through female life-story from gestation to adulthood and parenthood in turn. The opening poem seems to be about a child in the womb, using her mother’s body to nourish herself – one of Kennefick’s ironies is that she has been a vegetarian since childhood. Later, in ‘A Young Girl Considers Her Reflection’, the girl compares real self to an idealised self and is dissatisfied: “Instead I stare at a plump/face I do not recognise, its green eyes replicate. I try on your tiny pointed smile”. In a drunken conversation between two women, more anxiety is expended over the body shape of Irish nationalist revolutionary Maud Gonne than over her life and achievements: “my clothes are getting tight. Was she tiny? I ask; She was, you whisper”.

A central image is of the mouth and tongue, and particularly, the act of licking. This perhaps reaches its fullest articulation in ‘Big Girl’, where the protagonist pushes half-eaten chips from her own mouth into the mouths of her friends. It is an act that is both quasi-sexual (“I wanted to fill up/with the floppy compliance of beautiful wet tongues/flashing in and out”) and a symbolic blending and creating of each other (“Around I went parting/lips pushing masticated potato/onto the dent of your plump tongues/My saliva in your stomachs”).

In the final poem, a secular ‘Prayer to Audrey Hepburn’, some of these ideas come together with a healthier outcome. There is some suggestion that admiration/consumption of Hepburn was associated with sexual awaking/fear of the developing body (as a thirteen year-old, the poet cut out pictures of Audrey and “stuck those pieces/of you to my pink walls” and “prayed that I could sew/my mouth closed…be a sculpture made of skin”). The difference is that now the poet is a woman, and pregnant; Audrey’s blessing of her “pudgy belly” and “rat’s nest hair” by “pushing your gorgeous tongue along the length of mine” finally bestows joyful self-acceptance: “Afterwards, our seams popping, we shriek with laughter”.

Eat or We Both Starve is available online direct from publisher Carcanet Press, as well as other bookshops and retailers.