REVIEW: ‘THESE ARE THE HANDS’ ANTHOLOGY

REVIEW: ‘THESE ARE THE HANDS:
POEMS FROM THE HEART OF THE NHS’ ANTHOLOGY 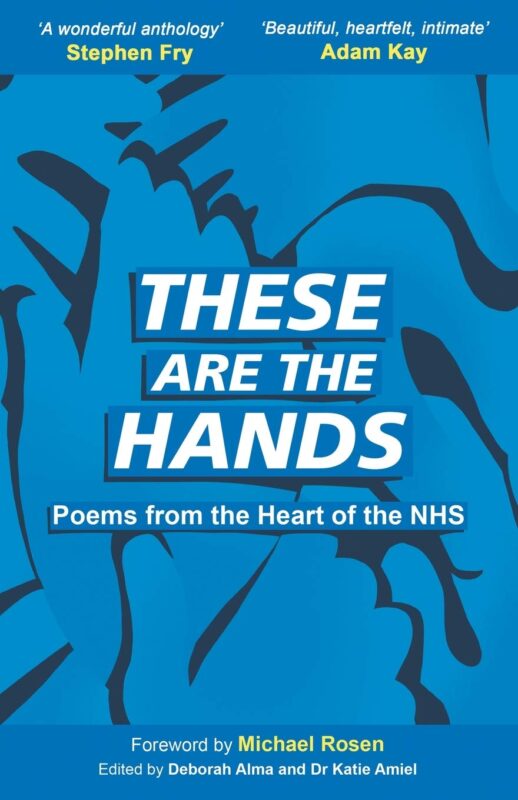 I wasn’t sure I would like this anthology. A collection of “poems from the heart of the NHS” – especially one whose launch coincided with the pandemic’s Thursday night clapping phase – might, I suspected, be a bit schmaltzy for my rarefied tastes. And then I found myself blindsided by the opening poem. ‘First Last-Offices 1979’ described two student nurses laying out an elderly man who had unostentatiously expired in a hospital side room. “Tears smarted at homemade jam sandwiches/wrapped in greaseproof paper – unopened and fresh/in his locker”.

For me, it was a bottle of hair tonic. It wasn’t the death itself that upset me, all those years ago when I too was a grass-green student nurse; it was finding that bottle in his locker afterwards. What broke me was the squealing collision of innocent pleasure with grim reality: even people who just want nice hair – even people who just love jam sandwiches – must die. I’ve never forgotten that patient, nor the sobering lesson he taught me.

In that respect, I have a lot in common with contributors to These Are the Hands, most of whom work in the NHS in some capacity. What’s striking is how many of them have chosen to crystallise their thoughts through recollections of a single patient. Indeed, many of these poems function as a sort of confessional: the poet often addressing the remembered patient in the second person, explaining to them the lasting impact they had.

This interconnectedness of patient and professional is perhaps the anthology’s most revealing insight. Patients are definitely not ‘just’ patients. In ‘Opening’, mother, baby and midwife-poet almost become a single entity: ‘Her gutteral sounds, deep, old as Eve./I breathe in rhythm between her pushes,/a fold of ear unfurls’. In ‘We mourn your children too’ a paediatrician confides to bereaved families “You hate us, love us, hug us, blame us./You wonder how we do it./So do we. We try. We cry./We mourn your children too.”  Elsewhere, a whole section is devoted to how staff feel when the tables are turned and they or their loved one themselves become patients. And what they feel is what anyone else would feel: “Continence to bedpan…Strength to empty malady,/Control to vulnerability”. Alone in being shunned is a cadaver for dissection, its “flesh too different from our own to compare”.

What you won’t find in abundance are angry poems, political poems or poems about the iniquitous effects of health service underfunding. While not entirely devoid of work in that vein, what this anthology mostly wants to do is put its arm around you and whisper the simple, comforting message that even though we may not have all the answers, we are, at least, all human. Even the most skilful surgeons order cheese and pickle sandwiches from the hospital canteen; even the most God-like betray, in the locker room afterwards, “a paunch and no plans for the weekend”.

And in that spirit – the spirit of the NHS itself – these are poems that are accessible to everyone. There are few unfamiliar narratives or stylistic challenges here, and little deliberate obscurantism; you could unhesitatingly give it as a gift to anyone who cares about the NHS. Its poets address the universal rites of passage – birth, death, illness, decline, guilt, regret and pain – that are common to us all, but which we often paradoxically experience as the times when we feel most alone. It’s poetry about grown-up stuff, honestly and sensitively addressed.

If you’ve worked in the NHS, that experience will have marked you; and – let’s not kid ourselves – not always in a good way. Like any large, unwieldy, multi-faceted organisation, the NHS doesn’t always get it right and isn’t always a comfortable place to be. But the idea behind it remains overwhelmingly inspiring, and the fact that that idea still flourishes and still remains a defining part of Britain’s national identity is something to be proud of. Or, as Sabrina Mahfouz (one of a sprinkling of ‘professional’ poets whose work is also included) puts it, “because of you,/we can still hold the hand of a child,/talk to them quietly about the goodness of hearts/people’s ability to learn from the past/to become kinder”.

Get your copy of These Are the Hands anthology online, direct from publisher Fair Acre Press.