REVIEW: TINA SEDERHOLM’S ‘THIS IS NOT THERAPY’

REVIEW: TINA SEDERHOLM’S ‘THIS IS NOT THERAPY’ 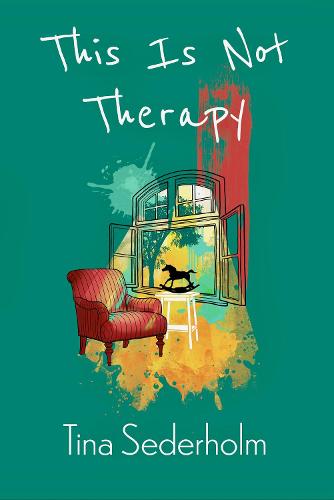 The title of Tina Sederholm’s 2021 collection This Is Not Therapy is ambiguous. Is it a warning to the reader? Or a position-statement from the poet on how she feels about her craft? Because while This Is Not Therapy is a mixed collection that tempers Big Questions poetry about life, the universe and everything (I use the phrase advisedly: at least two poems are overtly inspired by The Hitchhiker’s Guide to the Galaxy) with smaller canvases that revel in the relief offered by everyday joys, it is also about Sederholm’s relationship with poetry: how poetry helped her to grow and become her own person.

It’s a collection that’s perhaps best served to the middle aged. That’s not to say that readers of any age can’t enjoy Sederholm’s meditative, often delicately-observed work; but to get the full sighing-and-head-nodding-in-agreement response to her poems about loss of illusion, regret at paths not taken and dreams destined to be for ever unfulfilled – not to mention the helplessness of watching from the sidelines as beloved parents succumb to mental and physical decline – you probably need to be at that stage of your own life where you too are experiencing them as daily realities.

She begins the journey with self-discovery poems about moments that made her question the received wisdom – in her case, the formal Christianity – of her childhood. Both ‘The First Time I Came’ and ‘Jesus Loves You’ uncompromisingly confront the logical inconsistencies of religious belief (“I should spend/the rest of my life…atoning for my filthy existence…Forgive me if I find this ridiculous./Any deity that invented the clitoris/knew they were playing with fire”; “it’s a strange/kind of love that tries to protect people by threatening them”) but are also mixed with more whimsical poems. ‘Vegetarian Special at the Horse and Groom’ speculates on how the Bible became so obsessed with repentance by comparing it to a bizarrely misspelled pub menu item.

Later sections deal with parenthood and the pain of unplanned childlessness, the section title ‘To Parent or not to Parent’ perhaps interrogating the social platitude that women who are not mothers have not fully lived; later still comes the decline of older family members. A pivotal poem in this respect (its place at the half-way point may not be co-incidence) is ‘What’s It All For?’, a question posed by Sederholm’s father-in-law after he had been given six months to live. A taciturn, perhaps unknowable character (“he had rarely seemed a happy/ man, except when building his model railway”), Sederholm says his question “bears down/on me in the early hours more often than I care to mention”.

But it leads to enlightenment of a sort: “The point of the Hero’s journey was not the/prize. The point was the healing they received along the way”. This idea of life as self-healing ties in with the section heading ‘It’s All Therapy’ – but on the other hand, it’s a sentiment that seems at odds with the collection’s overall title. The link connecting the two brings us back, I think, to poetry itself.

Sederholm doesn’t sugar the pill when it comes to poetry’s frustrations. Although she calls it her ‘home’ (The Wizard of Oz is another repeated reference point), acknowledges that she is driven by an ache to be understood, and declares that “There is no other calling for me”, she still, as a rookie poet, took “two years to write/three poems, and even longer to sneak/into my first open mic”. As a seasoned reviewer, I raised a knowing smile at Sederholm’s description of poetic epiphany: “I only understood about thirty per cent./In retrospect, that was good going.”

I understood (or at least, I credited myself with understanding) more than thirty per cent of This Is Not Therapy. The relatability of these poems about Sederholm’s life inside and outside poetry is more than a little refreshing. In the case of a couple of the later ones, it came at the price of verging slightly too close to tweeness for my personal taste – but my recognition of that is, in a way, what this collection is about: poetry is being yourself. It’s something that appeals to Sederholm much more than her childhood Christianity; here, she says “There are churches enough/for everyone”.

This is Not Therapy is currently available for purchase online direct from publisher Burning Eye Books or from Tina’s website.