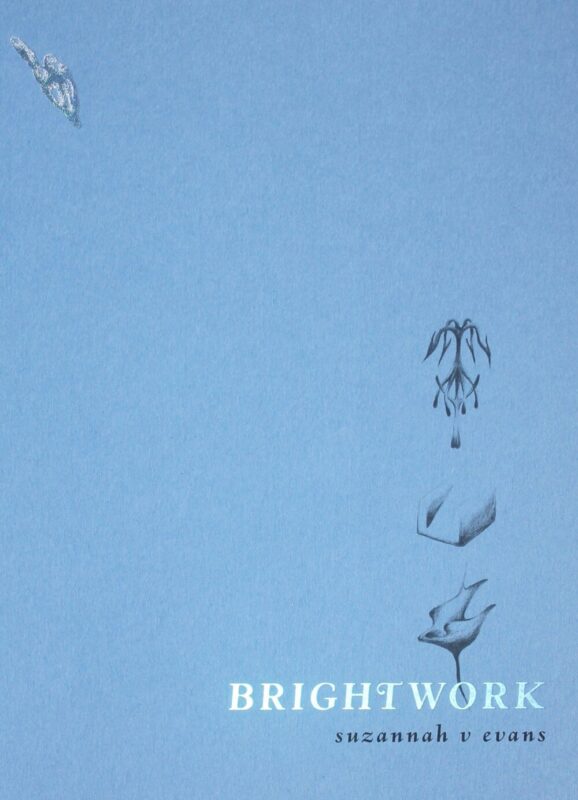 When it became obvious that French poet and essayist Francis Ponge was a major influence on Suzannah V Evans’ 2021 collection Brightwork, I had to admit my ignorance and Google him. For readers in the same boat, Ponge’s Wikipedia entry explains that he developed a form of prose poem that “avoided appeals to emotion and symbolism, and instead sought to minutely recreate the world of experience of everyday objects”. The Poetry Society adds that for Ponge, all objects “yearn to express themselves, and they mutely await the coming of the word so that they may reveal the hidden depths of their being”. If the inverted commas make me sound sceptical, it’s misleading: ‘coherent’, ‘enquiring’ and ‘multi-layered’ are all words I would apply to this jewel of a collection.

On one level, Brightwork presents shiningly accessible poems that are deeply evocative of the unique physical and sensory landscape of Bristol’s Underfall boatyard. Following the example of Ponge, Evans portrays the boatyard mostly through forensic focus on artefacts found within it. Frequently, these artefacts speak with their own voice. ‘Buoy’ introduces itself with the words “I am rounded/and supple as an orange”; likewise ‘Skip’: “I swallow, I open, I contain, I hold”. Other poems embed chants of boatyard-specific words (“Spritsail, butt block, camber, centreboard”) or impart a more immersive experience by recreating characteristic sounds and rhythms of boatyard objects: “the rock and pull/and pull and rock/of the boat in the dark/makes the water shudder”.

But drilling deeper, Brightwork is also a fascinating investigation of the relationship between descriptive language and the thing it describes. One poem that stood out for me was ‘Say Elbow, Say Heart’, which records a word-association game used to explore how boatbuilders visualise concepts: “I say elbow, they think of a curved piece/of frame at the turn of the bilge, I say heart/and they picture the centre of a section of timber”. Evans suggests that the words used around objects are absorbed into them, becoming part of their essence; and also seep into the boatbuilders’ subconscious, soundtracking their dreams: “Chocks away, heave-up, nearly there they call out/in their sleep”.

This classic existentialist problem of existence preceding essence is addressed more specifically in ‘Barnacle Oblong’, when Evans discovers that “there is no name for the hollowed space/between the keel and the rudder…the space is for the propeller/but there is no name for the space”. She reacts by asking passing visitors (Underfall is a tourist attraction as well as a working boatyard) to suggest names for this nameless void “and now/the boatyard is alive with words taking wing:/media luna, navigation alcove, pickle moon”. The poem poses questions about how an empty space with a name differs from an empty space without a name; but taken together with ‘Say Elbow, Say Heart’, it also illustrates the reflexivity of the essence/language continuum: in ‘Say Elbow, Say Heart’, words conjure up essence; in ‘Barnacle Oblong’, essence conjures up words.

The bigger question raised here is whether objects retain essence if there is no language to describe it. Evans finds alternatives to human language in the pontoon, which is “shaping a language. Ei-arch, ei-arch the/pontoon says, pulling away from the harbour wall”. ‘Slotting Machine No. 258’ meanwhile has sprouted “Little white patches with black lettering, as if the machine/has visibly begun to think. ‘Sluice Paddle No 2’ sees “Fine dustings of powder gather at the bottom of its/reinforced sections, like words that have disintegrated/and floated down to the silver-grey core of the subconscious”.

Beyond this, Brightwork also conveys an unmistakeable sense of winding down. At the centre of the collection, amidst the lull of boatyard poems, Evans joltingly opens ‘Scantling’ with “When I next lift my mother in her hoist…” but then returns to the sea, gifting mother a birds-eye view as “a climber, up the mizzen mast”. I don’t think this is symbolism; rather it is an attempt to unify essence across different existences. This unification recurs in the final poem, ‘Slipway Song’, where the song seems to be a parable of the human life cycle “and at the moment of playing, the/harbour is graced with double waves, as the boat’s waves/move in synchrony with the slipway’s sound waves”. Brightwork is that rarest of things: poetry that is at once scholarly, thought-provoking and achingly readable. Go, Suzannah!

Brightwork is available to purchase online, direct from publisher Guillemot Press, as well as other bookshops and retailers.