REVIEW: TINA SEDERHOLM’S ‘EVERYTHING WRONG WITH YOU IS BEAUTIFUL’

REVIEW: TINA SEDERHOLM’S ‘EVERYTHING WRONG WITH YOU IS BEAUTIFUL’ 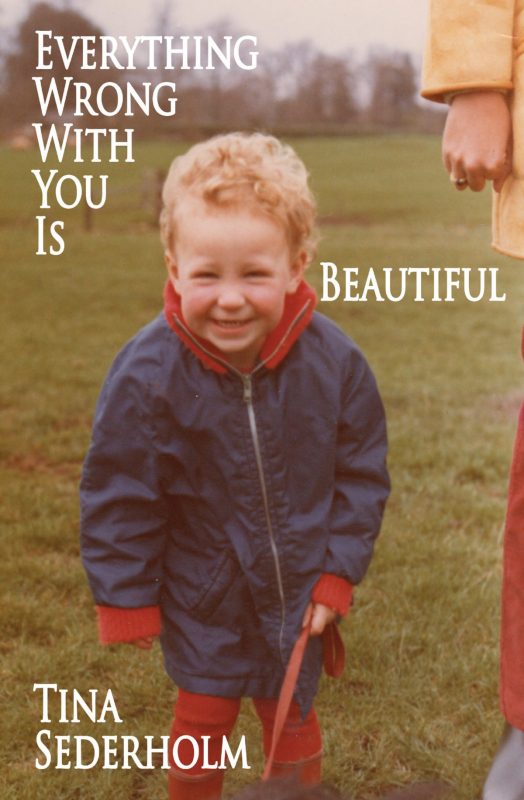 Call me a misanthropic old curmudgeon if you want to, but the title of Tina Sederholm’s first full-length collection had me rolling my eyes in despair. You see, ugly people like me don’t want to hear that cooing lie that Everything Wrong with You is Beautiful. All it does is confirm to us that beauty is the benchmark and ugliness is so not OK, that the only way to deal with it is to call it something else. What we want is a straight-up “Yep. You’re a car crash. But it doesn’t matter!” In the end, though, I was glad I didn’t bin the whole thing before I’d even got past the front cover. The title is deceptive; the collection as a whole is far more nuanced and reflective than its smiley-faces moniker might suggest.

For example, it’s comforting that failure makes Tina not beautiful, but interesting – something which for me has always been a more realistic ambition. Part Lord’s Prayer, part homage to Fatboy Slim, ‘Failure, you make me interesting’ condemns what the world calls success as “corporate”, “bland” and “homogenised”, its deluded acolytes “constantly on the run/chanting Failure is not an option/when you absolutely are”. It’s also a sham, a marketing exercise, the pursuit of which turned the younger poet into “a facsimile of myself”. This mission to acknowledge and embrace the whole person, flawed perhaps, but authentic and true is an essential aspect of the search for self-acceptance.

Clothing is a metaphor for this. In a posh clothes shop, the snooty assistant, hoping she’ll splash the cash, steers Tina towards buying two very similar dresses. She’s almost persuaded – but in the end buys neither. Instead she goes home to “have dinner/in a dress that’s completely mine./ After all, I can only ever wear/one dress at a time.” It’s a lesson that fellow-poet John Osborne has learned already. The single jumper he possesses, matted and shapeless from overuse, is worn “to gigs, in London, for photoshoots.”* His attachment becomes prophetic: “whomever he marries will be deeply loved./John will not mind if they get saggy/or start to gape.”

But it’s no easy ride. Loving yourself warts-and-all raises difficult questions. We may be able to live with our own shortcomings, but how should we react when we are impacted by other people’s, like the wife in ‘On Marriage’ whose creepy, alarm-bells-ringing mantra – “Because cursing you/when you don’t behave/the way I want you to/hurts me, not you” – reads as if scripted by her husband? And as feminists who “have not always/been fond of women” can we embrace “a snapped-off piece of…psyche” that could be an inner Donald Trump? Ladies, I think we can agree it doesn’t get more challenging than that.

In the midst of this quest for life, discovering that the penultimate section is entirely devoted to death is perhaps surprising. It shouldn’t be: confrontation with death is confrontation with life at its most head-on. These six brief, impressionistic snapshots form a sort of collection-within-a-collection, meditating on the strategies we use to ready ourselves for oblivion, mourn others and live with loss. By the end, Tina knows what she must do. Rejecting siren calls to return to the waters of pre-becoming, she turns back to the land “where there’s still…work to be done.” (Poet’s italics).

In this context, the final section, ‘Today’, acts as a defiant riposte to its predecessor. ‘Even if today is all you have’, it seems to say, ‘enjoy it!’. But these poems are not so much a discovery of the true self as a re-discovery. The mature poet who revels in being a poet – even if her work is not lauded as great art and doesn’t make her any money – who implores us to “be a dog./Rejoice in limbs,/spin until giddy” is the same joyous girl who in Section One “leapt onto the/pitch. Clothes absent, hair/flying, arms/akimbo.” It was the stuff in-between that got in the way.

* Learning that Osborne wears it “for photoshoots” prompted me to try for a visual. Because it’s unhelpfully black-and-white, I can’t tell if the jumper in this image is “the colour…of day-old porridge”. But it’s my only candidate.

Everything Wrong with You is Beautiful is available from Burning Eye Books, from Tina’s website, or from other online retailers.