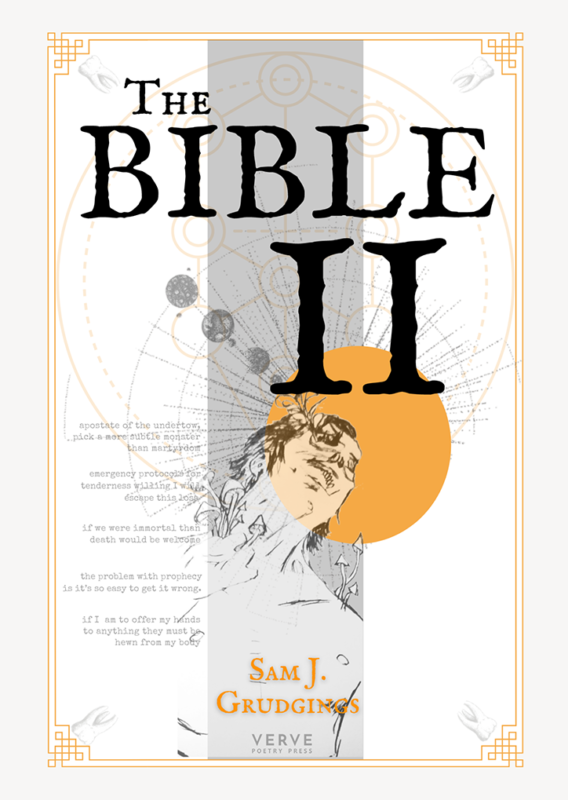 “Your own personal Jesus/Someone to hear your prayers/Someone who’s there.” In 1990, Martin Gore, principal song writer of 80s synth-pop band Depeche Mode, told Spin Magazine that the band’s then-recent hit ‘Personal Jesus’ was inspired by the marriage of Elvis and Priscilla Presley. I don’t know if that’s the whole story or not – but there’s no mistaking the meaning the song took on when Johnny Cash covered it in 2002. In the done-it-all, lived-it-all hands of the Man In Black, it’s an addiction song if ever I heard one.

Sam J Grudgings’ 2021 collection The Bible II comes from a similar place. It’s not an easy read – if you like short, pretty or light-hearted poetry, it probably isn’t for you; but it is a stunningly honest examination of the realities of alcoholism and the long shadows they cast even after the drinking stops. Raised in the church, Grudgings draws on an intimate knowledge of Christianity to portray his ten-year relationship with alcohol – and its aftermath – as akin to the relationship between worshipper and god. This dense, claustrophobic, self-lacerating collection is an otherwise empty room in which the addict and his poison confront each other. Outsiders barely register.

In the first section, Grudgings is drinking, in denial and increasingly isolated. ‘This is how angels make themselves known’ is perhaps the poem I like best here. A bald text message from a friend – “you need to stop drinking” – is subjected to lengthy and forensic self-justificatory word-by-word dissection ending with “I have no idea what he meant”. It’s not clear whether this is the reaction of Grudgings to the message or his friend to the explanation. Admission to hospital with liver failure signals a turning point: “The god of my body is dead, tongue haunted by famine”.

The desperate embodiment of physical dependency is conveyed through repeated – sometimes disturbing – imagery around the body eating itself as well as individual body parts such as the stomach, the throat, the hands and especially the mouth. But adopting the familiar concept of the body as temple/site of worship, this interplays with references to architecture, particularly architectural ruin: “My body is a temple to the echoes/left in the churches you abandoned. The crowded mouth of gospel holds no space for problems like me”.

The remaining three sections are all about rebuilding after alcoholism and shed useful light on the problems faced by addicts in recovery. Foremost among these is the problem of how to integrate an addicted past into the story of the self, but without allowing it to return and ruin the present. Grudgings likens himself to kintsugi (Japanese repaired ceramics) and describes his situation in lines like “if the god of your body is dead, is the church and all its work made/worthless?” and “if the old gods have ravaged this world we have built,/we will show them they can’t take it with them”.

Presumably there were underlying issues that led Grudgings into alcoholism; he doesn’t reference them directly. The nearest he comes is perhaps ‘Things I wish I learned in the undertow’. Reminiscent of Rudyard Kipling’s ‘If’, this poem talks of not knowing how to touch “because you were never softly” and “holding on too hard to something that serves no purpose”. Instead of Kipling’s “you’ll be a Man, my son”, Grudgings has “a father figure that you could never live up to”. Happily, the collection ends in a more hopeful place, with Grudgings accepting the rehabilitation is a process and that appreciation of being alive and in the moment can be enough: “The time has come to stop dying…The problem is sober isn’t a happy ever/after, it’s the start”.

Anyone who has experienced addiction at first- or second-hand can learn a lot from the deep and painful plunge that is this collection. It does take some getting through, however. If I could give Grudgings some readerly advice, it would be to vary his voice and try experimenting with economy. When everything is in the same register, excellence can’t stand out; when he says so much, he doesn’t leave me wanting more. Which is pity, because Grudgings is telling us stuff we really need to hear.

The Bible II, published by Verve Poetry Press, is available for purchase direct from the poet on his website.