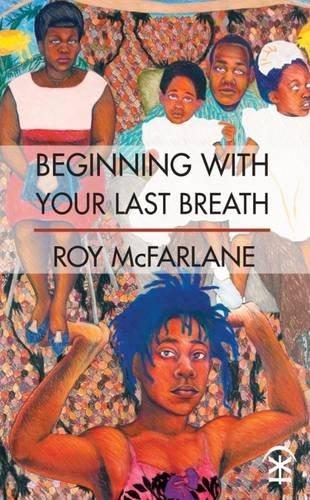 In the violently racist 1970s, a very young Lenny Henry used to tell a joke that went something like this: “Enoch Powell says he’ll give me £100 to go home…which is great, because it’s only ten quid back to Dudley on the train from here”. Though told good-naturedly, its punch-line was barbed. Britain is my home – Henry was giving notice to his overwhelmingly white audiences – every bit as much as it is yours.

It was a point well made: the sheer crudeness of 1970s racism demanded an uncompromising, full-frontal response. Henry’s genius was to deliver it gift-wrapped in the well-loved British archetype of the cheekie-chappie stand-up comic.

The reality, as is usual, was messier. ‘Home’ should ideally be the definition of ‘security’; but in Beginning With Your Last Breath, Roy McFarlane’s deeply affecting debut collection, the poet navigates the complexities of creating identity amidst a double-dose of unease. Firstly, growing up black in a society that could seem – at best – ambivalent to his presence within it; and secondly, discovering that the couple he knew as Mum and Dad were not his birth parents – a story not without parallels to Henry’s.

Raised in the church, McFarlane, like the Bible, begins at Genesis: the revelation that he is adopted signals expulsion from his personal Garden of Eden. Though gently and sensitively conveyed, his new knowledge leaves him reeling: “it couldn’t be right because I knew my mother”. The rest of the book reads as a delicate chronicle of his search for a way back to that tantalising prelapsarian security he enjoyed until moments before the opening page.

Because despite McFarlane’s confession that “I’m not feeling God like I used to”, Beginning with Your Last Breath is profoundly rooted in Christianity: it is, in essence, one man’s journey from fall to redemption, and the testings he is subject to along the way.

The major testing is, inevitably, racism – and McFarlane is unflinching. ‘After all is said and done’ is an angry reckoning of the brutal attack launched on his friend Bevan for no other reason than that he is black. But rather than the actions of hate-filled individuals, it is perhaps the glimpses of institutional racism that give us most pause. ‘The Tebbit Test (Patriotism)’ neatly dissects the double standard at the heart of the politician’s infamous yardstick; ‘Lighting up History’ voices black frustration at the knee-jerk evaluation of every black hero relative to some white ‘ideal’.

And McFarlane’s alienation is made all the sharper by the deep wells of affection he clearly harbours for his native Black Country. “Tipton…has got me” he muses of the cheerfully bonkers locale where he finds “an oss everywhere/ in somebody’s garden, along the street”. When “cultures flow, merge and make/ their own journeys into front rooms” an alternative vision – of a kinder, more tolerant reality, begins to open up.

But it is in the fourth and final section, where McFarlane chronicles his beloved mother’s final illness, and salvation is so close he can almost touch it, that the collection’s most moving poems are concentrated. ‘The map of your leg’ tenderly fuses earlier themes of physicality, secrets, the anxious scanning of the present for traces of the past; and echoes the sinner Mary Magdalene, washing Christ’s feet.

Ironically, it is only when his mother is on her deathbed (‘Nearly There (II)’), that McFarlane finally reaches the place he needs to be. Recalling the time he made his way through a blizzard “with my head bowed down, body beaten cold”, he sees his mother “waiting for me, door open/ drawing me in from the cold”.

But despite the warm welcome, what her voice actually tells him is “to keep going on”. His mother’s true legacy, he now understands, is not eternal shielding from life’s discomforts; instead, it is the security of a love that, come what may, will be forever his home. 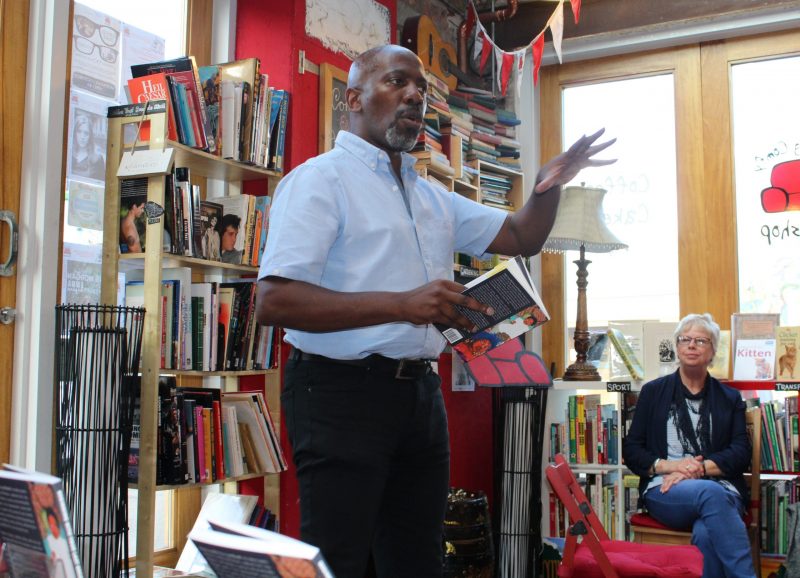 Roy reading at The Big Comfy Lit Fest in 2016

Beginning with Your Last Breath is available online from Nine Arches Press.

Editor’s note: Roy’s second collection The Healing Next Time (also with Nine Arches Press) came out near the end of 2018. On February 7th, the poet will be headlining in Coventry at HCE’s Fire & Dust gig.