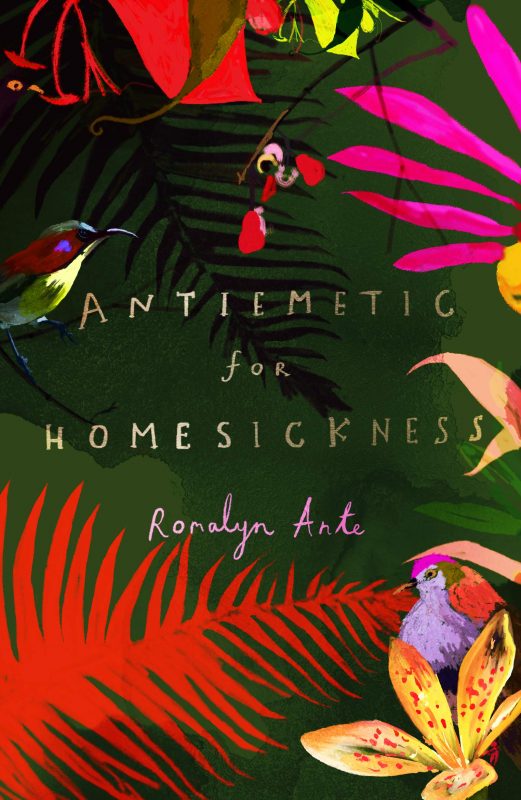 The day after the EU referendum, as frantic news reporters scrambled round unglamorous northern towns conducting panicky vox pops with random pedestrians in an attempt to discover why they voted leave in such numbers, two elderly ladies found themselves on national television. They were delighted with the result, said one – her friend nodding in agreement – “because we remember how things used to be. And now we can go back there.”

I’m going to park that image for now, and move on to Antiemetic for Homesickness, Romalyn Ante’s 2020 meditation on the struggles and longings of migrant Filipino healthcare workers adjusting to life in dark, wintery Britain. The collection shines a welcome light on a too-often overlooked community, whose hard work and dedication to keeping the NHS afloat – both before the pandemic and even more so now – puts this country enormously in their debt.

Ante’s poems move between her mother’s chronic homesickness after she comes to Britain to work as a nurse, and her own experiences – both as a ‘left-behind’ child in the Philippines and as a migrant in her own right when she joins her mother in the UK and eventually enters nursing herself. This flipping of perspectives allows Ante to develop a rich geography of yearning – on one side, for the physical realities and sensory experiences that confirm identity; on the other, for the missing parent; and linked to both, for the lost assurance of childhood when “all we need is in our reach”.

In some ways, this is a coming-of-age collection – its defining event the untimely shattering of Ante’s childhood security by the complexities of adult life. Her mother departs the Philippines in part to justify the hard-earned cash laid out on her own education; also to pay for treatment of family members who are sick. “Say better life, say better life” she carefully intones, as if repetition will finally convince her.

Because what is it, this ‘better life’? The mother “walks to work when the sky is black/and comes out from work when the sky is black”. Elsewhere, an uncomprehending brush with casual English idiom momentarily flashes into focus her liminal migrant status: “It’s neither here nor there…where is it, then?” The child, meanwhile, dreams of her mother’s soothing touch but wakes “to the clatter of her luggage/to find her gone”. Western consumer goods sent home in ‘Balikbayan boxes’ are small consolation for a parent’s absence. Compared with the glowing family gatherings and evocative tastes of memory, ‘better life’ seems a poor and colourless thing.

But longing for an idealised past in the face of a threatening present is not unique to Filipinos. Lines from Ante’s poem ‘Patis’ for instance (“The locals no longer nap in the grotto…/The paddy fields/now a steadfast highway./There is a Batangas I cannot return to – ”) are powerfully reminiscent of Poem 40 from A Shropshire Lad, A E Houseman’s quintessentially English cycle that reached its peak of popularity during World War One: “That is the land of lost content,/I see it shining plain,/The happy highways where I went/And cannot come again.” Which returns me to the two old ladies in their northern town.

Straddling the centre of Antiemetic for Homesickness is a long, understandably angry poem about the hurt and sense of betrayal felt about the Brexit vote by migrant nurses who have worked themselves (in some cases literally) to death for the NHS. I didn’t vote for Brexit. I doubt it will deliver what it promised, or if delivering it is even desirable. I know what “how things used to be” is potentially code for, even when falling from the smiling lips of an unimpeachably sweet old lady. I don’t equate Ante with that. But when migrant workers and leave voters are hankering after essentially the same thing, you know something larger is afoot.

In their different ways, both Antiemetic for Homesickness and the two old ladies are the human faces of anxiety and dislocation brought on by universally frightening phenomena like globalisation, unequal distribution of wealth and environmental degradation. And we are all human. We all share the instinct to seek refuge from change we feel powerless to control. What we need to understand is that what appears to divide us, may actually unite us.

Antiemetic for Homesickness (Penguin) is available for purchase from various online retailers.