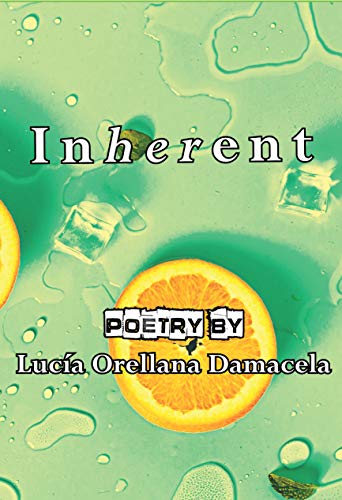 I flew out of Woolworths the other night and down Castle Gates. Past the library, past the bingo hall that’s still a cinema to me, past the station and onto Chester Street, where the dark, oily maw of Charles Clark’s Garage leered unsettlingly at passers-by. I’d forgotten about Charles Clark’s Garage. A block of flats has replaced it now, and if anyone had asked me – during waking hours – what was there before, I’d probably have said I couldn’t remember. And yet here it was: so real I could almost feel its metallic, exhaust-fume breath blowing in my face. It made me wonder what other lost things live on inside my head, if only I could access them.

Inherent, the 2020 collection from Ecuadorian-American poet Lucía Orellana Damacela is informed by a landscape rather more arresting than a smelly old garage on a busy street. Within its pages, memories of salt-sprayed Pacific beaches and rail trips through the high Andes mingle with “mangoes from laden trees dangling over/the river”. But despite the differences in our experiences, what Orellana Damacela is tapping into is something common to all of us: the childhood maps that form our earliest reference points to the world and our place within it.

Orellana Damacela’s viewpoint is a sliding one. It is one of looking back, but also one of reassessing our relationship with the past as we ourselves progress through the stages of life. This simultaneous two-directional movement is at its clearest in ‘The Páramo Train’, where “The train/charges forward while I go back in time.” Orellana Damacela’s train ride through the Andes sets off childhood reminiscences of playing cards with a neighbour’s son and feeling “like a grown up for the first time”. But it soon becomes clear that the reason for her journey is to scatter her dead father’s ashes on the snowy slopes around his home town.

This idea is developed further over two poems about the blue bike, a much-prized schoolgirl trophy stolen four months after acquisition, fate forever unknown. But Orellana Damacela has clearly never forgotten it – and paradoxically, the mystery surrounding its whereabouts is the very thing that allows its life to continue in poetry: she imagines it leaning against a tree somewhere, covered in rust – but at the same time, on a journey to “landscapes of words unknown,/with oxygen that gives life/and oxygen that corrodes/in every stroke.”

There are many ways for the past to survive in the present. Snapshots are one – real ones, as in Abuela’s photo album, and mental ones, as in ‘Beached Moments’ where Orellana Damacela recalls herself “run[ning] on a Pacific beach/by her mother’s side/hair braided with sunshine and salt.” Inherited physical characteristics as well as familial health problems are another; Ecuadorian food and traditional recipes a third. Objects are useful too – but in ‘Mememtos’, Orellana Damacela wearies of “Containers, receptacles for things/to be preserved, counted, treasured.” Loss of faith in the idea that “holding things to ransom/equals to owning the moment” is perhaps the prelude to radical decluttering.

Orellana Damacela has travelled far from her Ecuadorian roots to make a new life in the USA. In Inherent, she portrays her personal history as something that is both constant and constantly evolving. On the one hand, it is the bedrock of her identity; but on the other, her relationship with it changes as she moves forward, coming to terms firstly with illness, decline and death of loved ones and warnings of mortality in herself; and then with re-birth and the new perspectives brought by motherhood. Inherent is a warm, unostentatious meditation on how the past creates us, but does not necessarily define us.

Inherent is available to purchase from Fly-on-the-Wall Press and other online bookstores.