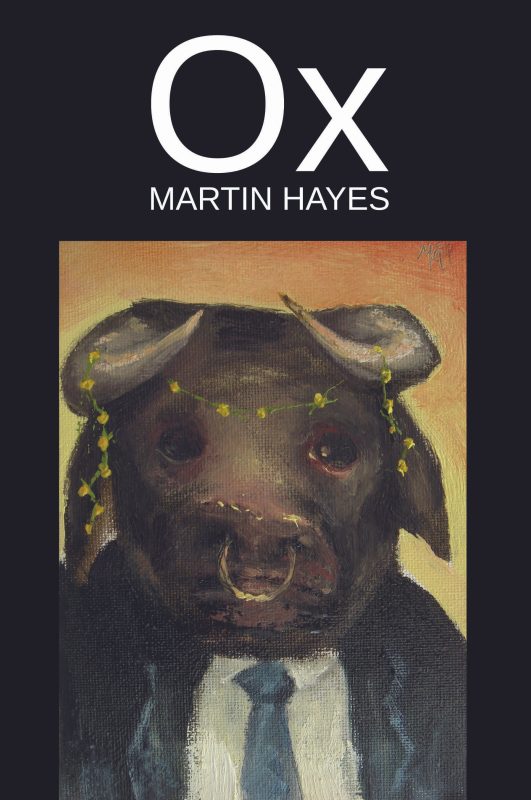 At first glance, Martin Hayes’ poetry presents as pretty straightforward stuff. Reviewing his earlier collection, The Things Our Hands Once Stood For, I used phrases like “realist style and uncompromising stance” and opined that “this is poetry that reads more as gritty fly-on-the-wall documentary”. Ox, Hayes’ new collection, in some ways invites similar reactions: his strength as a poet undoubtedly lies in his instinct to make his work accessible by telling it like it is.

And yet this time around, there is a difference. Whereas The Things Our Hands Once Stood For spoke openly and unequivocally about working conditions in the offices of a London courier company, Ox, which deals with many of the same issues, is allegory. This is a collection whose identity has been shaped not by telling-it-like-it-is, but by what-cannot-be-spoken.

As I understand it, Ox came about after Hayes received a warning from his employers over the subjects he chooses to write about. So even without examining the poems in detail, the fact that he has had to resort to allegory is itself a powerful statement about freedom of speech, corporate control and the egregious employment practices that large companies would rather you didn’t know about.

Told from the point of view of an eponymous farm animal, Ox is a sad and shocking tale of overwork, underfeeding (low pay) and random acts of brutality meted out by Farmer. Ox’s life is not his own. It is Farmer, not Ox, who decides whether Ox is fit for work. When Ox protests that he is ill, he is met with “there is nothing wrong with you/you are faking it/you are full of shit/and you will not eat tonight”. (One of the joys of allegory is not having to hold back on what you suspect your boss is really thinking.) He is not supposed to ask questions. His skills are made redundant by new technology, but he cannot find alternative employment because he has no other skills. The situation drives him to mental illness. He contemplates suicide.

Hayes is – perhaps surprisingly – not entirely sympathetic. While he admires Ox for his strength and resilience, he is frustrated by his bovine passivity, his resignation to his lot and his “clods for brains” inability to grasp what’s really going on – factors that arguably make Ox complicit in his own subjugation. And that’s not the only thing that might raise eyebrows.

The problem is not that Ox is unwilling to work – he is willing to work, but his current situation is one of pure exploitation, trapping him in an endless, nightmarish present which he can neither escape nor control. There is, however, a bigger picture. The bigger picture is that it doesn’t have to be like this. From old songs and herd-wisdom, Ox is aware of a golden past when “oxen were allowed to be oxen”. Meanwhile “the hills at the far end of the field/where the fairy tales live” offer tantalising glimpses of a different kind of future. The question is: will Ox ever work out how to reach it?

Ox is endearingly illogical (it is never explained why, in the age of the gig economy, farmers are still using ox-drawn ploughs) and in places laugh-out-loud hilarious (the annual Oxen versus Goats Football Match reminded me of Father Ted’s immortal Tunnel of Goats). But the parallel it most obviously invites is with George Orwell’s 1945 classic Animal Farm; compared to that, it could be argued that Ox’s prescription for solving society’s ills is disingenuous and was exposed as illusory eighty years ago. Yet there is much truth in Ox. And as with its hulking, four-square hero – a noble beast outrageously robbed of his birthright – its very existence is an indictment.

Ox is available online from Knives Forks and Spoons Press.