REVIEW: MARTIN HAYES’ ‘THE THINGS OUR HANDS ONCE STOOD FOR’

REVIEW: MARTIN HAYES’ ‘THE THINGS OUR HANDS ONCE STOOD FOR’ 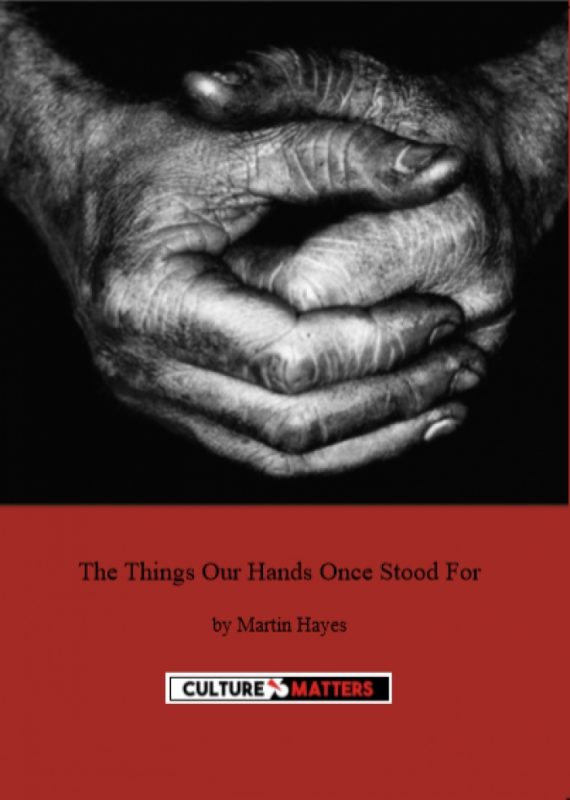 Contrary to what you might think, it’s no walk in the park, this poetry reviewing lark. There have been occasions when I’ve read a collection for the first time and come out the other end with only the haziest idea of what the poet was going on about; even multiple re-reads haven’t always improved matters that much. Which is why Martin Hayes’ collection The Things Our Hands Once Stood For came, in some ways, as a welcome bit of R&R.

There’s no doubting what it’s about. Almost all the poems are set in the strip-lit, stale-aired offices of a London courier company, from where teams of controllers, staring into screens for eleven hours a day, oversee deliveries across the capital. Neither is there much doubt about where Hayes’ sympathies lie: his straightforward realist style and uncompromising stance pull no punches in their descriptions of the indignity and unfairness of modern employment, and the terrible price it extracts from those stuck on the lower rungs.

That’s not to say that Hayes’ work is devoid of imagery. Caring only about satisfying their shareholders, overpaid bosses who “squeeze away at people’s lives like they were plastic cups” and “squeeze a man in a fist until he pops” treat the human beings who work for them as nothing but commodities, and disposable ones at that. But accompanied by harsh, over-contrasty black-and-white photos, this is poetry that in some ways reads more as gritty fly-on-the-wall documentary.

And like any good documentary, one of its strengths is its warts-and-all portrayal of a cast of recognisable characters. Among those introduced by Hayes are sexual show-off Dermot, nostalgic Ray, for ever stuck in past glories, and dangerously disturbed Ronnie, whose mental instability seems to represent the insanity of the entire situation. Narrative dynamic is supplied firstly by the arrival of ‘The New Automated Allocating System’ and then the takeover of the company by a larger one – both of which devalue the controllers’ highly skilled work, threaten their job security and increase their already rocketing stress levels.

In Hayes’ assured hands, these elements are woven into powerful polemic. Quietly desperate lives are pushed to the edge by uncaring corporations; controllers are dragged into the moral morass of “picking up and delivering their menaces/not knowing that men and women and children got blown apart”; inequalities are so glaring that while the CEO “twist[s] a pair of rugby ball cufflinks/so that they are positioned perfectly straight/on the ends of a £200 shirt”, the workers who create his wealth survive just “one withheld monthly pay cheque/away from disaster”.

Given the political nature of Hayes’ writing, there are, inevitably, areas where I don’t agree with him. Because the people who suffer most from environmental degradation are those who are already poor, I don’t agree with his impatient dismissal of environmental concerns. Because I believe in art’s potential to enrich the lives of everyone, I don’t agree that the artist’s only true vocation is “to write that song or poem start/the revolution/that will change everything”. Most urgently – and although I appreciate that Hayes is writing about a male-dominated workplace and in some ways, the collection is as much about men as it is about work – I don’t agree with him leaving unchallenged his characters’ view of women as nothing but ego-boosting sexual accessories or rapacious mercenaries who’ll walk out on a man if he can’t bring home a wage.

In fact, Hayes’ relationship with the controllers who are his subjects is more complex than this. At the same time as he venerates their tenacity in sticking at a soul-destroying job so that they can “put cereal on the table in front of [their] 6 year old” and extols their nobility as artists with algorithm-beating brains, he mercilessly punctures their pathetic male posturing and their inability to connect their jingoistic voting habits to the position they find themselves in.

Deep down, Hayes seems to suspect that achieving even his humble-enough dream of a world where “everybody/has a job that pays them enough money/to put water and food/into the mouths of their families” may not be as straightforward as his politics make it appear. But despite its flaws, this rawly honest, gut-wrenchingly sincere portrayal of a rotten system through the microcosm of a single office certainly gives food for thought.

The Things Our Hands Once Stood For is available online from Culture Matters.