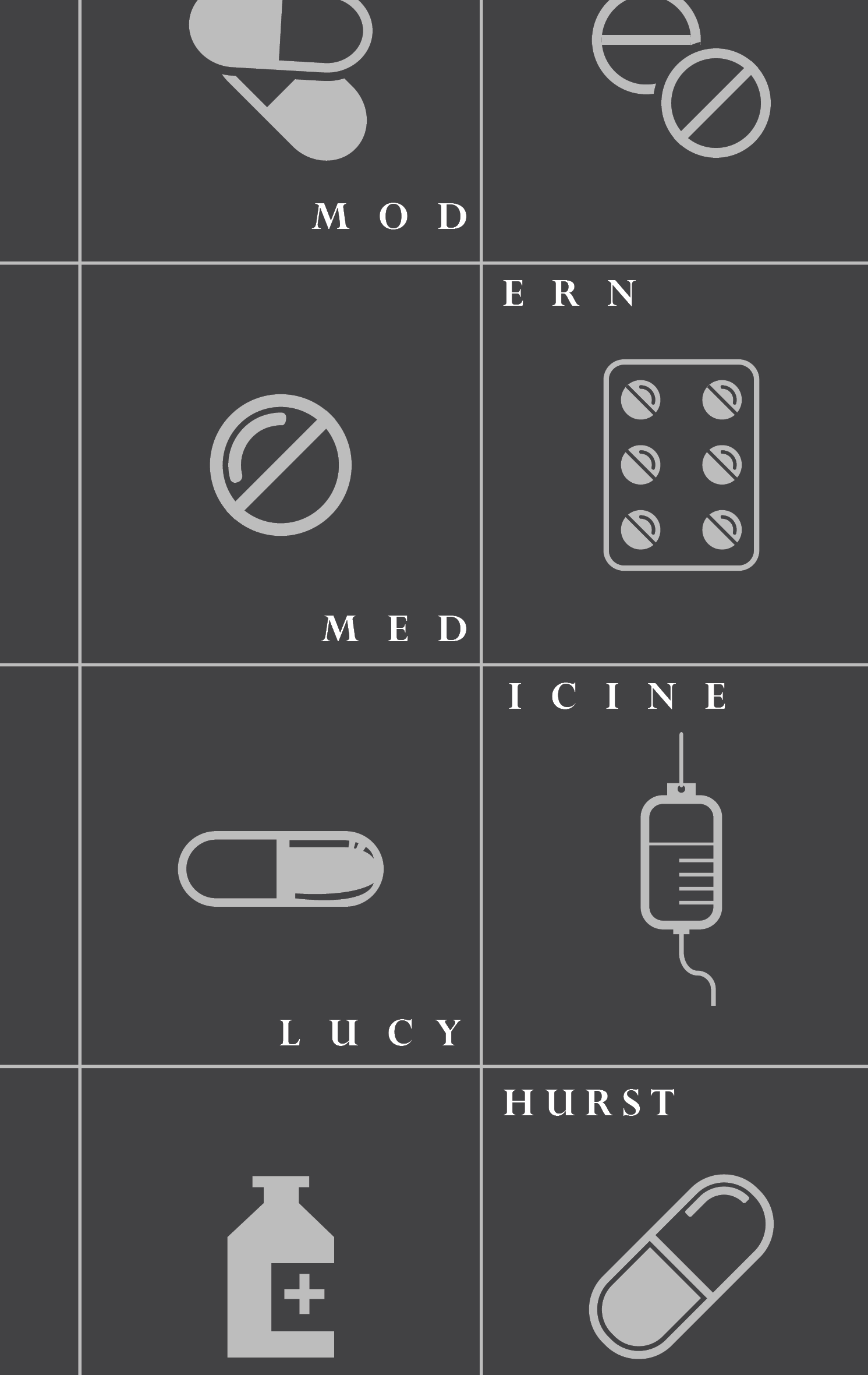 Perhaps the best way I can describe Lucy Hurst’s experimental chapbook Modern Medicine is as an intimate history of pain. ‘Intimate’ because it is rooted in the poet’s deeply personal experience of chronic pain; and ‘history’ because for as long as there has been sentient life, there has been pain. In this sense, pain is an oddly paradoxical phenomenon: universal and unifying, and intensely individual, lonely and difficult to communicate.

‘At The Museum’, the opening poem in the collection, weaves these strands together as the poet contemplates a male skeleton unearthed from a nameless past. His story is lost to us, but there is one thing that we can say with certainty: the evidence of violent death inscribed on his bones speaks of knowledge of severe pain. Pain is, in a sense, his only memorial. But as well as speaking of past suffering, his glass display case suggests an incubator in the high-tech Neonatal Intensive Care Unit; and Hurst feels her emotional affinity to him in the throbbing of her menstruating womb.

Linking them together through the concept of cultural history, the title sequence further develops this theme of pain as both a physical phenomenon whose unchanging nature opens up an empathic route to the past, and a unique, unreproducible personal experience. Each of the poem’s five sections is a modern response to medical interventions from the past such as the application of leeches and trepanning (drilling holes in the skull).

Hurst uses these poems to explore, amongst other things, self harm and the relationship of pain to art and language. In ‘Light a Fire’ meanwhile, relentless rhythm (likened to that of the Billy Joel song ‘We Didn’t Start the Fire’) of “body is burning/body breathing/body bleeding/body repeats itself” is used to convey the feeling of being trapped inside an endless, energy-sapping cycle of pain, “a grossly acceptable state of emergency/what an exhausting feat, just to be”.

And what is ‘being’ anyway, in the context of chronic pain? In the de-humanising power-play of ‘Resistance to Treatment’, Hurst subjects herself to “prying hands, who/claw over my body, to find how invasively we can test – before/I object”, but despite adopting their medical jargon, is still misunderstood by doctors. “i’m not resisting treatment/i’m in an early retirement of the on/& on, of medicinal yoga, no dairy/diets and multivitamins” conveys both the isolation of a life dominated by the management of pain, and the plethora of often contradictory advice.

It still isn’t enough. As well as a cultural history, pain has a cultural present – meaning that sufferers may be judged on whether they accommodate themselves to it in ‘acceptable’ or ‘unacceptable’ ways. In ‘The Walk to Rome’ Hurst observes that “there’s an ethical code of conduct to hurting around others;/it seems wrong to say, wrong to do”. In ‘Trepanning’, she senses that friends and family view her as a problem, such that “those you love all fear you”.

The last poems of Modern Medicine broaden out the concept of pain to include existential pain in the face of looming environmental crisis, and explore how our responses to the anxieties it provokes mirror our responses to individuals enduring physical pain. ‘Edge Lands’, with its indeterminate world of half full/half empty reflects the paralysis induced by systems that simultaneously acknowledge/don’t acknowledge the reality we are in. The lines “i pack up my liminal spaces/& stuff them into my poetry” seem to lament a culture where awkwardness and embarrassment mean that poetry is the only place where disquiet can be openly confessed.

The one thing that sustains Hurst is hope. From the heartbreaking “i carry my hope/that if i can’t have this world, someone else can”, comes the final prospect of relief brought by shared perspectives. Hurst’s parting words “i want to submerge myself in your waters/and slosh about in your mind…& the pain that resides into me neatly/must be smaller” suggest that beyond the tribulations of the merely physical, the meeting of intellects carries with it the possibility of finally arriving at a purer, less troubled space.

Modern Medicine is available to purchase online from Fly On the Wall Press.