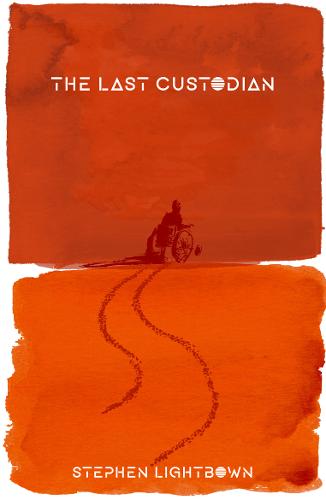 Stephen Lightbown’s second collection The Last Custodian tells the story of wheelchair-user Luke and his year-long, self-propelled journey across a post-apocalyptic southern England where almost all other humans are dead. As a premise, I think that’s sufficiently eye-catching for me to ditch the cunning preambles I usually construct as a way of luring readers into these reviews, and get straight to the poetry.

The nature of the catastrophe is never specified; all we know is that the landscape of Britain is now covered in a thick layer of red dust. On one level, Luke’s long, solitary odyssey is a sci-fi/adventure story whose twist is that its hero is paraplegic; but contained within this, I sense another dimension. As well as a road-trip through an external landscape of destruction, this is also a deeply personal journey through Luke’s internal landscape: an exploration of the aftermath of apocalypse visited on his own body and his own personal relationships.

In the course of his travels Luke reveals that, like Stephen himself, he became paralysed as the result of an accident. Despite this, The Last Custodian is not at all self-pitying or burdened by gloom. As much as anything, Stephen uses the poems to test and to celebrate Luke’s courage, instinct for life, and enduring sense of the ridiculous in the face of cataclysmic disaster. But hanging inescapably over them is also a mourning for the life that has been lost and the life that might have been; and a reflection on the loneliness of disability and the strain it puts on family ties.

Sometimes Luke’s sense of loss brings him nightmares: in ‘Day 333: Sandwich’ he opens a power-outed freezer but “can’t look any more without knowing/the meal I could have had.” Then he finds “Between the melted peas/…A severed head./ Eyes open, mouth closed. Male, over fifty.” But enforced solitude also brings relief from both the unavoidable physicality of able-bodied other people, and, perhaps, from the mocking ghosts of able-bodied other selves: “It’s scary how free I feel/not to look at your/potential, wish/I could be the life/you took for granted” (Day 14: Bristol).

One way of interpreting Luke’s journey is as movement away from a life of the body, and towards a life of words. Bodies are finished. As at Taunton Deane Services, where they “pool into their/footwells like a footbath/of their own liquifying/organs”, the banal landscape of British infrastructure is everywhere filled with the remains of rotting corpses. But at the same time, Luke is urged onwards by the dual spur of chance encounters with significant texts such as Cervantes’ Don Quixote – which uses the antics of its errant protagonist to question whether it is the individual who is mad, or the world they live in – and enigmatic messages apparently left for him by the mysterious ‘Librarian’. When he finally meets her, she tells him she is “trying to build the world/with books”.

The poem that best encapsulates this fitful, halting transition from one life to another is the bleakly affecting ‘Day 138: Pease Pottage Services, M23’. Contemplating a battered plastic bag stuck in the branches of a tree, Luke sympathetically gives it voice: “I should/have been a kite, you would say as you climbed free on the/wind, and then: trapped. Back to bag.” Through the perseverance of a mundane piece of litter, the possibility another, more hopeful future has perhaps been glimpsed.

Although often upsetting, Luke’s lonely journey (and metaphorically, maybe the writing process, much of which was undertaken during lockdown) gives him welcome respite from the wearying populist narratives of disability (“shouts of/well done mate as I push up a hill/…the same/can you do a wheelie? question/I’ve heard four hundred and twelve/times before”) and the necessary space to decide who he is, what his disability really means and the course he wants his future life to take.

Despite its seemingly shattering premise, The Last Custodian is actually an uplifting story of human capacity for renewal. In our last sighting of him, Luke has symbolically buried the past. He remains in darkness, but he is working towards the light at the other end – and the ultimate prize of a life to be lived in a different language.

The Last Custodian is available for purchase from Stephen’s website.