REVIEW: JULIAN BISHOP’S ‘WE SAW IT ALL HAPPEN’

REVIEW: JULIAN BISHOP’S ‘WE SAW IT ALL HAPPEN’ 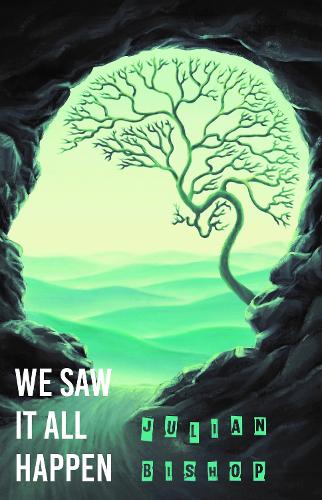 Say out loud the title of Julian Bishop’s new collection We Saw It All Happen and a ghostly question hangs in the after-silence. We saw it all happen….but what did we do? A former BBC environmental reporter, Bishop says in his introduction that his aim is “to harness my journalistic background and offer a form of poetic reportage rather than personal hand-wringing”. The result is a broad-canvas collection ranging freely over vast terrains of environmental crisis from melting glaciers to habitat destruction to greenwash, but with less to say about the emotional impacts of this knowledge. At its heart though is a different tension – one that Bishop himself acknowledges in the introduction. Of his days as a journalist he says he hoped “that my reports might go some small way to change hearts and minds. I think it’s fair to say I failed”. Can poetry do better?

Well: telling people stuff they don’t want to hear is never easy. Bishop’s frustration is most palpable in the title poem’s reduction of environmental catastrophe to passive entertainment: “channel trawling/prawn toast popcorn calamari…and here’s the new One Planet…catching it all/on repeat”. ‘When It Came To Ways Of Saving The Planet’ focuses on hearing rather than seeing, noting that “we were ears, all ears,/auricles cocked, cochlears entirely attentive” but also probing the value of information without action. Meditating on the Museum of London’s 2018 fatberg exhibition meanwhile, ‘Fatberg’ (irrelevant aside: you’d be surprised how many fatberg-inspired poems this reviewer has seen recently) describes “a monstrous sculpture/carved out of our own bodies,/a disgusting portrayal in oils/of a terrible time of waste.” To avoid reading that last line as “waste of time” takes concentration – and again the ghost-question swishes: is this just navel-gazing?

In fact, many of these poems read like miniature stories with a twist in tail, often a killer pun designed to jolt us out of cushiony denial and into the hard reality of what is happening on our watch. ‘Snow Leopard’, about the arguably unnecessary slaughter of an ‘escaped’ member of this endangered species at Dudley Zoo in 2018, is a good example: “to protect the world from a threatened cat/the marksman only took one shot/to protect the threatened cat from the world/we only had one shot”. Elsewhere, Bishop again manipulates language to provocative effect in the lipogram ‘Global Warming’, using only the letters that spell the poem’s title to create an uneasy, almost millenarian, sense of options narrowing: “Algal alarm, a wan/bog, a blown worm on a lawn,/a lamb born in a binbag”.

Indeed, the effects of environmental catastrophe are stranger than fiction. ‘Plastic Rain’ (the collection is not without its Dad Rock moments) is about the “1000 tons of microplastic that fall in the US annually, equivalent to over 120 million plastic water bottles”. What does not change is human greed; and while the division of the collection into a menu of sections entitled ‘A Taster’, ‘Mains’ and ‘Afters’ is without doubt partly about the damage done to ecosystems and wild seafood stocks by intensive food production, I think the real point, made by poems like ‘Alberta’s Story’, ‘Oh Sugar!’ and ‘Big O’ is the unsustainability of treating nature as a free lunch.

But shrugging the blame wholly onto corporate irresponsibility is an abdication. In turning a blind eye to the damage our individual lifestyle choices inflict on nature, we are all complicit. Surveying his fruit bowl, “a problematic city of pineapple/skyscrapers, a maze of apricot alleys, banana/dead ends”, Bishop reflects that he himself is not immune from pressure to prioritise short-term gratification over planetary welfare, confessing that “Whenever I’m hungry, I loose my footing”.

There are optimistic poems: ‘Hope Is A Thing With Tubers’ is about bioengineering plants to capture carbon in their roots – but few of us have the training to contribute to scientific breakthroughs. The question posed by We Saw It All Happen is whether seeing – and creating and bearing witness – is part of the solution or just another complacent illusion of doing something without really doing anything. But in a week when confirmation that 2022 was the UK’s hottest year on record was comprehensively trounced as a news story by the fate of a royal dog bowl – it’s got to be somewhere to start.

We Saw It All Happen is available to purchase online, direct from publisher Fly on the Wall Press, as well as other bookshops and retailers.