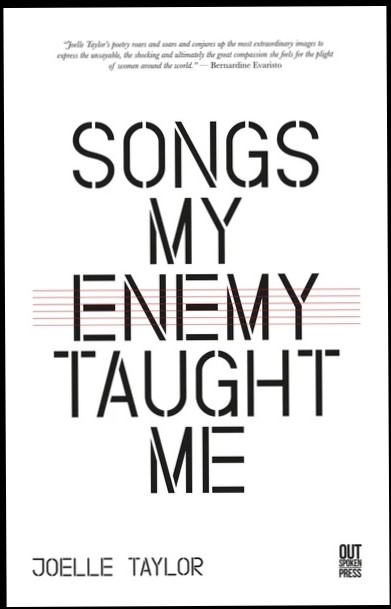 What is the purpose of poetry? To tell the poet’s story? To convey something beautiful in beautiful words? To reveal a truth, perhaps? But what if that truth is brutal, ugly, controversial and not something people want to hear? What then is poetry’s role? Joelle Taylor’s 2017 collection Songs My Enemy Taught Me asks all these questions and more. It’s not an easy read; it isn’t meant to be.

In terms of understanding Taylor’s mission, it’s worth taking time to read the introduction. There, she explains the concept of ‘investigative poetry’ or ‘poetry reportage’, a technique she uses throughout the collection to expose just a tiny part of the myriad injustices perpetrated on women throughout the world at both a personal and institutional level. Taylor has done her homework: spoken to women, heard their voices, listened to their stories – and then used what she learned to inform her writing. In common with Margaret Atwood’s prizewinning novel The Handmaid’s Tale, everything contained in here really happened.

And the result is a long, angry and unflinchingly harrowing collection, embracing a wide variety of poetic forms and covering some extremely challenging areas such as female genital mutilation, sex trafficking and homophobic killing. Some poems, such as the one about Bibi Ayisha, the only known female warlord in Afghanistan, or the reversal poem about the imagined rape of a man by a woman, bravely push at the boundaries of what might be considered acceptable subject matter for poetry. In this sense, Taylor is to be congratulated for having a conversation about whether some realities are so ugly that they should be considered ‘off limits’ to poetry or inherently ‘unpoetical’; or whether their very ugliness is the reason we must confront them.

Because while it may, in some ways, resemble a reference manual, this is very much a collection of poetry. Threaded through it are courageous testamentary poems about the lasting effects of Taylor’s own exposure to sexual abuse, of the post-traumatic stress it caused and the salvation she found amongst the women of the Greenham Common and on the queer women scene of 1990s London. In the introduction, Taylor explains how she used her story as the starting point for exploring the trauma of other women and comments that “inside every poem is a poem, and inside that, there is another one still”. Songs My Enemy Taught Me is the personal made political – in action.

It’s also rich in poignant imagery and metaphor. Birds and butterflies flutter and soar from its pages, teeth are tower blocks and city skylines, and again and again: the perfect circle, the gun barrel, the hole, the exit wound, the ouroboros of invisible, silenced women eating their own words. “They can always see us,” says Taylor “when they want to erase us” – in other words, women’s choice is between remaining concealed in the patriarchal narrative, or rejecting it, and making themselves targets.

Songs My Enemy Taught Me is about unstopping mouths, making women visible and singing their stories into being. In spite of that, I’d hesitate to call it celebratory – the abuses catalogued here give no cause for that – but part of bringing women’s experience to the light rightly involves documenting their resilience and their private acts of resistance. It is controversial, even within its own terms: in the current climate, Taylor’s casual assertion that “at the core of every woman is the womb” is undoubtedly provocative, perhaps deliberately so. But even from my perspective as a cis hetero female, I had always cherished the hope that my brain was at the core of my being, rather than my reproductive organs. Others might ask whether repeated recourse to the imagery of war merely reproduces a masculinist approach to problem-solving.

Songs My Enemy Taught Me is available from Out-Spoken Press and other online retailers such as Waterstones and UK Bookshop. Keep an eye out for Joelle’s upcoming collection later this year: Cunto and Other Poems (The Westbourne Press, June 2021).