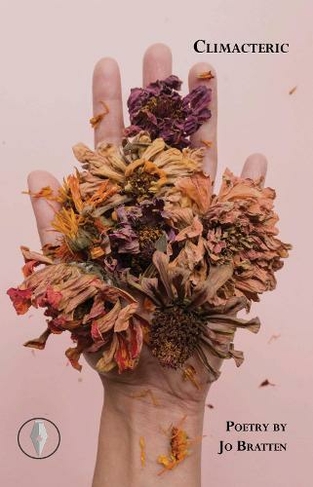 Climacteric, Jo Bratten’s début pamphlet from Fly on the Wall Press, is a proper poet’s collection. What I mean by that is – it’s highly literary, liberally peppered with couplets, tercets and sonnets, freely referencing of nineteenth century poets such as Gerard Manley Hopkins and William Wordsworth, and also shadows Wordsworth in many of his poetic preoccupations: think union with nature, childhood, water and wandering (Bratten is an American resident in the UK). Differences? Of course: those of context and of time. Bratten is writing from the dizzying double summit of a woman approaching the middle-age and the tipping point in human relations with nature.

If referencing older poetic genres puts you off, think again. Climacteric is neither irrelevant nor stuffy. The opening poem has Bratten “scrubbing/the bath, tugging snakes of hair/from the stinking drain, wondering/how so much of me got down here”, angrily aware that her life is swilling away and unable to control it. The second stanza widens from narrow domesticity to musing on where the bits Bratten has shed might be now: “In the cold estuary I’m circling/black terns under a groggy sky/tangling with pintails, shored on a tide/of mud”. Pastoral immortality through union with nature has become twenty-first century persistence as marine detritus. Bratten ends by imagining herself “somewhere in the belly of a whale,/retched up on your shore, a warning”.

The collection actually contains numerous warnings: about the female body, about the planet, about the loss of loved ones that is the inevitable accompaniment of middle age, about a concurrent blurring of the self and its boundaries, presaged in the first poem and continued later in lines like “Days standing at the edge of myself/hovering in the blurred bits/watching me stage this masque of brisk/efficiency”. In connection with the female body, the theme of shame and the disowning of the self is reprised in ‘Rubbish Day’ as “all Wednesday long/I wonder if my nasty little secrets are strewn/along the street…I step over the wadded/tissues, the blackened tampon dredged/in coffee grounds”.

Connected again to ageing, the fine boundary between ripening and rot is elsewhere evident in the collection’s many references to soft fruit, on the one hand, as in ‘Solace’, symbolic of contented fulfilment in autumnal sunshine and on the other, as in ‘Fall’ of “the damping/down of things, the slow oozings,/slower withering of leaf and seed,/the general slump of skin, flesh and core,/the happy clomping of the cider press”. Together with references to snakes (as in the first poem), Bratten is perhaps making a point about the supposed wisdom of age, but what is that wisdom worth when as ‘Chiaroscuro’ points out, “we’re all doomscrolling/before dawn”.

Bratten also includes poems about her religious upbringing in the dying coal towns of eastern Ohio and tender elegies marking the death of her father from heart problems during the Coronavirus pandemic. If your older relatives ask the same puzzled questions every time you see them no matter how many times you’ve patiently sketched out modern realities, you’ll relate to ‘Scant Ground’: “He always asks me if I have a garden…and I explain again that space/in the city belongs to the rich, explain/student loans, mortgages, interest rates”; but its parting line expresses gratitude for enduring gifts received from those we love: “In this narrow plant his words, pull weeds,/bless rain. His hand on my shoulder like the air”.

Clearly referencing Wordsworth’s ‘Composed on Westminster Bridge’, the concluding sonnet ‘Sunset Over Watford’ continues this guarded optimism. Describing a sunset rather than a sunrise, but balanced composition in February rather than September, comparison with Wordsworth nonetheless brings out the earlier themes of the heart, the encroachment on nature of urban sprawl, and inner peace; while the reference to “old men on the bench” nods perhaps, via Bob Dylan’s ‘North Country Blues’, at the collapsing mining communities of North America.

If I say this is a collection about how poetry begets poetry, I risk making it sound academic and dry; and it isn’t that. It’s human; it’s relatable. But if you’re an aspiring poet who’s wondering how you might contextualise your work within the traditions of the past while still keeping it relevant, you could do worse than study this collection.

Climacteric is available online, as a physical copy or in e-book form direct from publisher Fly on the Wall Press, as well as other bookshops and retailers.