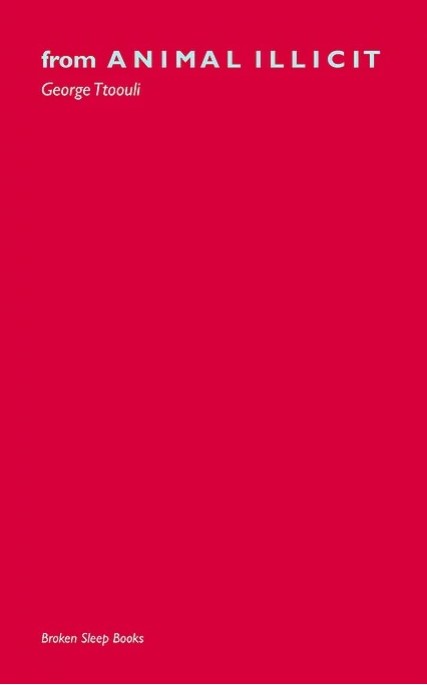 Started your Christmas shopping yet? Here’s a bit of advice: if you’re giving poetry books this year, maybe don’t choose George Ttoouli’s 2020 volume from ANIMAL ILLICIT for the formal verse enthusiast in your life. For anyone else though, this complex, intellectually demanding, highly experimental shape-shifter of a collection will supply enough food for thought to get them through the holidays and well into next year.

It’s a collection I almost hesitate to review, because to review is to pin down, and this is poetry that is all about not being pinned down: not to one narrative, not to one iteration, not to one interpretation. As Ttoouli told Rupert Loydell in an interview last year, the version published by Broken Sleep Books “concocts a temporary assemblage into a spurious body without organs…I hate the idea of rigid structures”. Even without reading the poems, the reader’s entry into a looping, counter-intuitive reality is signalled by the pagination, which is non-linear and relies as much on emojis and other cryptic symbols as it does on conventional numerals.

So how to describe a collection that potentially regards description as a kind of violation? Well, starting on (relatively) stable ground, I think it’s fair to call this ‘nature poetry’. Ttoouli is clearly inspired by the natural world, and explores his broader themes against a background of human/nature interplay/breakdown. Coventry readers will enjoy spotting familiar locations such as Tocil Wood and Swanswell Park; and references to classic poets like Keats, Wordsworth and Eliot are slipped in as grounding, a reassurance that – for all its seeming strangeness – Ttoouli’s work is actually an organic outgrowth of his predecessor poets.

Beyond that, and perhaps paradoxically for a work so fluid, I came away from from ANIMAL ILLICIT with lots of thoughts about boundaries – building them up, breaking them down. At the top of the piece, I described Ttoouli’s poetry as “intellectually demanding” – and so it is. But looked at it another way, it’s the opposite. Much of it plays around with the inanities, indecisiveness and banal blurb on the side of product packaging that fills ninety-nine per cent of our consciousness ninety-nine per cent of the time. But if every thought is potential poetry, does poetry have any meaning?

For me, the collection’s most arresting moment comes in ‘an oasis of horror’, when Ttoouli suddenly punches through the sac of his own work and – next thing you know – is angrily surveying it alongside the reader: “oh fuck you poetry is there nothing you’ll leave sacred nothing/you won’t taint”. In his frustration, what he seems to be asking is whether poetry really connects us to ourselves? Or whether its unceasing imperative to convert emotion into language simply erects more barriers?

And yet: language is all we have, so solutions can only lie within it. ‘8/1013 15:10 Tocil Wood transect’  disrupts conventional boundaries between words to create new ways of seeing and enforce slow reading: “moss over   takes s th  e dead sap   ling in  to un death”. ‘Sussex Envoi’ abrades and breaks down poetic language like the sea abrading pebbles on a beach. ‘17/8/16 14:40 Swanswell Park’ ponders the relationship of words to objects. ‘Preface’ suggests that emotional purity may be found by adopting the entirely alien formulations of birdsong.

It’s an approach that leaves plenty of space for the reader to recycle and insert their own meanings. I derived a curious satisfaction from fitting the words of the last half of ‘this year a delayed heat’ to the tune of Plastic Bertrand’s 1978 punk parody ‘Ça plane pour moi’. I doubt Ttoouli had considered this as a possible response; but if meaning is constantly mediated by deeply personal experience, I also doubt he’d dismiss it as invalid.

Which returns me again to boundaries: if meaning is so bounded, so specific to individuals and to moment, if ‘land rhymes with land and speed/with itself again because all these things are/themselves and nothing more’, how can we know each other, communicate ideas, share love, solve the climate crisis? I’m not sure that from ANIMAL ILLICIT answers any of that. But within its richly evocative, deeply human labyrinth, it does pose the questions very beautifully.

From ANIMAL ILLICIT is available for purchase from Broken Sleep Books.