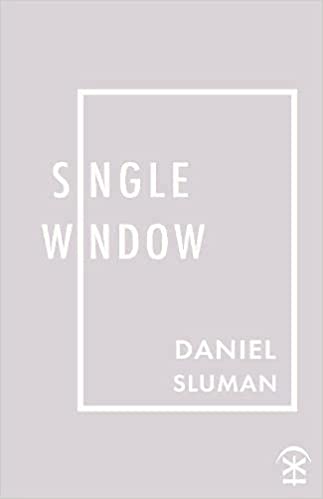 The thing about windows is, they operate in two directions. Daniel Sluman’s 2021 poetry/photography collection Single Window (a nod, perhaps, to Alfred Hitchcock’s classic film Rear Window*) is the unflinchingly honest reportage of an intensely challenging year endured by himself and his wife – “[he] an amputee with chronic pain, [she] suffering from Crohn’s Disease and Fibromyalgia” – in isolation from society “except for a single window, where they watched the world moving around them”.

But actually, that’s only half the story. Flick it round, and the collection itself becomes a window – one through which the readers peer inwards at Daniel and Emily, and at the same time perhaps catch shadowy reflections of themselves in the glass. Sadly, this is not a lockdown memoir. The year in question is 2016. This is about exposing indignities and restrictions such as the “middle-aged woman peel[ing] off our socks/& strip[ping] us layer by layer/like she’s fleecing sheep” that are the day-to-day mundanity of living with disability.

The opposed poles of restriction and space are important concepts in Single Window and are conveyed by conscious choices in poetic form and language. Overarchingly, there is a sense of poetry enclosed by book cover just as Daniel’s life is enclosed by walls: the poems become a project to create secret spaces inside that confinement. So instead of punctuation, Sluman uses non-standard layouts and extended emptiness between words; from the absence of his leg, he fashions a kind of presence “this is how it feels/to have your trauma held…your soft lips pressed against this void/kills me again & again”; spaces are created within spaces – under the duvet for example; and the book is permeated by domestic sounds and smells drifting in from distant parts of the house: “I listen out/past the gases sliding in the fridge/& the thud of radiators expanding with heat”.

Related to this is the idea of spilling over, or occupying too much space for comfort. In a 2020 interview with Wordgathering Journal, Daniel spoke about his earlier poem ‘Shove ten pounds of sugar in a seven-pound bag’. He describes that image as metaphor for something that “doesn’t work, it’s messy, it provides a semantic and emotional excess that can’t be accounted for and that hopefully leads people to investigate it further.” In Single Window, this concept is confronted through the taboo of disabled sex: the collection is home to deeply erotic poetry, culminating in Emily’s “nipples spilt over the top of your bra”. The conflict of this image with conventional narratives of disability may be uncomfortable, but is testament to the necessary inventiveness and hidden richness of lives lived under restrictions; and the tidal wash of retreat and advance bestows an organic, breathing quality.

Drugs are a similarly unexpected space-expander. Daniel is prescribed Oramorph (drinkable morphine) to ease his chronic pain – which means that Single Window could sit within the canon of opiated poetry. And indeed, there are some interesting parallels between Single Window and Samuel Taylor Coleridge’s Kubla Khan, probably the most famously-opiated poem in the English language. Kubla Khan is – intriguingly – about the relationship between a walled city or ‘Pleasure Dome’ and the world outside it. And while Coleridge was inspired by reading about the summer capital of the Yuan Dynasty, Single Window’s most obviously opiated poem – in which the poet’s waking dream transforms him into a slumberously-sinking sea monster – is inspired by an episode of David Attenborough’s TV series Blue Planet.

Scholars agree that one of the questions posed by Kubla Khan is whether the poetic imagination is a blessing or a curse. By merging its frustrations and its private joys, Single Window extends this question to the experience of disability. Against “we drag ourselves/from week to week/& the world carries the beautiful/like the room carries the light” stands “cripples love best/because love is an assembly/& we have always been broken”; against “pain spreads/like piss pushing through/the creases/of your jeans” stands “we sleep…sprawled in a pile stilled/like marble figures chiselled into sheets”. Single window? It may actually be the non-disabled world’s tragically unimaginative concept of what disability actually is.

* Thanks to my old friend (and new poetry convert!) Dr S for spotting that one.