How do we read today? How is the way we read impacted by social, economic, and psychological theory; and more importantly, is there an alternative? 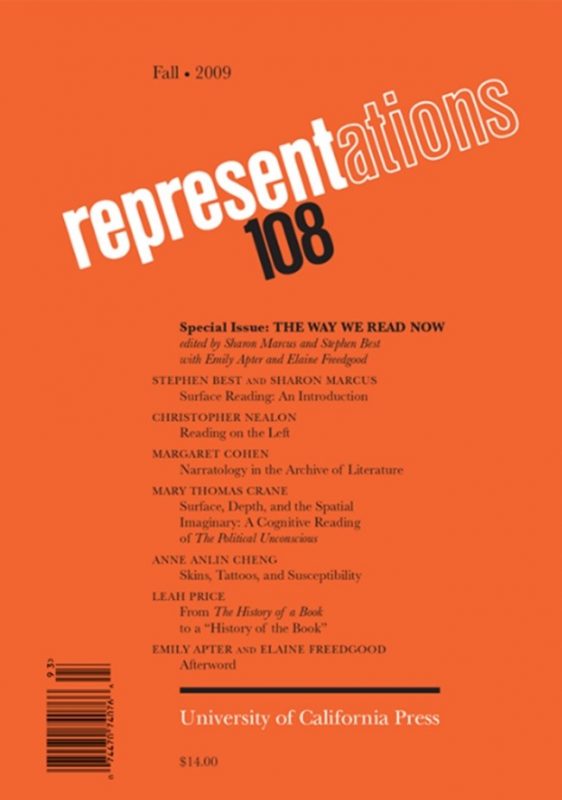 Those are the questions that Sharon Marcus and Stephen Best attempt to answer in the volume 108 of Representations with their article “Surface Reading: An Introduction”. Followed by a repertory of essays on the subject, the text introduces the concept of “surface reading”, as well as the range of approaches to literary criticism it produces; whilst considering the historical and cultural impact of Freudian and Marxist theories in the way critics approach the analysis of literary text.

Marcus and Best start by defining the concept of “symptomatic reading” as a practice encompassing “an interpretative method that argues that the most interesting aspect of a text is what it represses.” Interpretation should therefore seek, as Fredric Jameson describes it, “a latent meaning behind a manifest one”. The notion was firstly introduced by Althusser, a French Marxist philosopher, whose writings were particularly popular for their applicability as interpretative frameworks in the analysis of Marx’s works. To Althusser, “texts are shaped by questions they do not themselves pose and contain symptoms that help interpreters articulate those questions, which lie outside texts as their absent causes”. Truth is thus perceived as an antilogos, that is, what cannot be immediately understood because it is “too complex to describe”.

In line with this, Frederic Jameson poses that the only absent cause is history itself and the “strong” critic “must rewrite narrative in terms of master codes, disclosing its status as ideology, as an imaginary resolution of real contradictions.” Art works as “expression of struggle” and freedom would emerge from an “agon with the ideological text” as the Marxist critic would have to wrestle to recover “the truth hidden in the depths of the text”. In other words, the critic reveals – “unmasks” – the history that the text (partially) represses.

This notion of absence as repression resonates critically with Freud’s theory of the conflict between the individual’s socially aware self, and the powerful whims and urges it unconsciously suppresses. As Freud articulates in his theory, the difficulty in acknowledging those repressed desires (our “true” nature) lies in the individual’s own resistance to accept them due to an awareness of their inadequateness and fear of punishment. Still, the state of vigilance that surveils our instinctive self is not constant, and often those desires end up revealing themselves in some way or another through dreams or psychotic episodes, as “symptoms” of the process of repression. It is through those symptoms that individuals can finally access the unconscious that ultimately motivates all the complex mechanisms at play in the ways they interact with the other, and with themselves.

However, as the authors later point out, symptomatic reading has failed by “creating a false binary between latent and manifest content”, which led depth readers to often neglect or ignore what is evident in the “paranoid urge” to discover what has been hidden.

Following this observation, the article introduces what Marcus and Best understand as “surface reading”, or “just reading”, a method that approaches “surface” not as “superficial and deceiving”, as symptomatic readers have often defined it, but as “what is evident, perceptible, apprehensible in texts; what is neither hidden or hiding”; “what insists on being looked at rather than what we must train ourselves to see through”.

As previously mentioned, surface reading – as a concept and theoretical stance – opens the possibility for numerous approaches to literary criticism, many of them described in Marcus and Best’s article. Some approaches focus on the “materiality” of the surface, focusing on how writing encourages certain perspectives – certain “material workings” in the reader’s brain; others embrace surface as an affective stance and seek to attend to one’s emotional responses to a work, in an attempt to preserve the text’s original meaning during the process of interpretation. However, independently of the approach we choose, it seems that surface reading is heading towards a literary criticism that relies more on description, rather than on evaluation; a reading that focuses more on what the text is, rather than what a text means.

This evokes important ethical questions regarding the purpose of art and literature, for it suggests that readers should accept things as they are presented to them, in a way that can be perceived as endorsing the status quo. The authors address this issue by explaining that this “desire to be free from having a political agenda that determines in advance how we interpret texts” is founded in the belief that “a true openness to all the potentials made available by texts” is crucial to a reading that “does not reduce them to instrumental means to an end and is the best way to say anything accurate and true about them”. The incorporation of technology to assist in the analysis of texts is also suggested, as a way of reducing subjectivity and thus unlock “the truth” of a text. As the authors explain, “[w]e are not envisioning a world in which computers replace literary critics but are curious about one in which we work with them to expand what we do.” Following Bruno Latour’s argument, they present surface reading as a way of overcoming the obstacles created by an “excessive emphasis on ideological demystification”.

Yet, some texts (if not all of them) are political and meant to be read as such. In a reality where everything is treated as commodity, art and literature are no exception. Even texts that are not written with ideological and political purposes are inevitably shaped by a range of historical and political factors that might not be specified in the text; and endeavours to “not be political” can be seen not only as a formal choice, but also as, ironically, a political one. It is also important to consider texts where the meaning is co-constructed, and thus dependent of the reader’s interpretation. When is subjectivity useful to literary analysis; and when is it best replaced by technology? Isn’t that a subjective question in itself? Marcus and Best’s article provides illuminating reflections on reading today, but it also raises relevant questions regarding the role of the literary critic, and the incorporation of scientific and technological advancement into disciplines traditionally associated exclusively to the sphere of human activity. Finally, is it art for art’s sake enough, and if yes: how are we to appreciate it?

Sharon Marcus is a Professor of English and Comparative Literature at Colombia University, specializing in nineteenth-century British and French literature and culture. Her studies focus particularly in the history of urbanism and architecture; gender and sexuality studies; narrative theory; and 19th-century theatre and performance. >>Find more about Sharon Marcus<<

Stephen Best is a Professor and affiliated member of the Berkeley English department in the University of California. His studies comprehend a great variety of fields and materials, such as American and African-American culture and literature, cinema and technology, rhetoric and the law, as well as critical theory. >>More about Stephen Best<<