“He stands next to Oswald Moseley pictures, to learn stuff via osmosis,
The mere mention of asylum seekers, can lead to a near thrombosis,
If only he were a rabbit, so we could bring on some myxomatosis
For the preposterous gammon balloon.”
_______________________-from ‘The Preposterous Gammon Balloon’ (p.26) 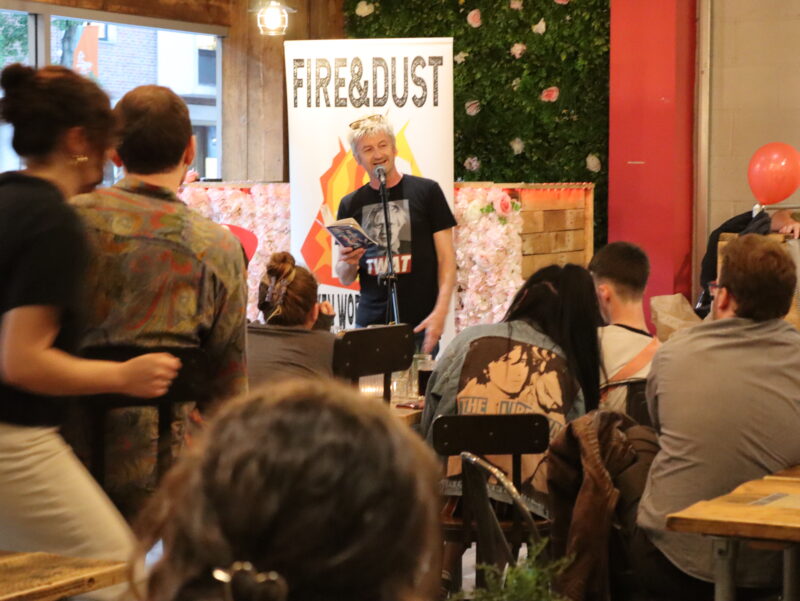 Spoz (AKA Giovanni Esposito) is an award-winning performance poet, singer/songwriter, film-maker and playwright. He was Birmingham’s Poet Laureate in 2006-2007 and is currently poet-in-residence at Birmingham City FC. Spoz has featured on BBC and Central Television and on various national and local radio shows, and has performed at some impressive festivals, including Glastonbury, Cheltenham Lit Fest, Shambala, Ledbury Poetry Festival and Wychwood. He works a lot with young people in schools, which includes facilitating school poetry slam projects nationwide; both his poetry collection Spoz’s Shorts and the Occasional Long One and Canalligator, a graphic novel in poetry form, are suitable for KS2 and KS3 pupils. Sometimes Angry, Spoz’s collection for adults, was published by Verve Poetry Press in 2019.

On 7th July 2022, Spoz was the headliner at our Fire & Dust poetry event. We caught up with him after the gig, to ask a few questions…

HCE: Tell us a little about your background and journey as a writer so far. What inspired you to start creating and performing poetry?

SPOZ: I got into writing lyrics for songs first of all. I’ve been playing (badly) in bands for years and found I enjoyed and had a knack for writing lyrics. I then started seeing some punk poets like John Cooper Clarke and Attila the Stockbroker and really enjoyed what they were doing. Then it was some 80s hip hop, mainly Disposable Heroes of Hiphoprisy that really made me sit up and listen. It all stemmed from that really. I got into some quirky stuff too, like John Hegley…I loved his stuff and still do. Then I met a Brum poet called Dreadlockalien…and off I went!

HCE: Would you say there are themes or motifs that you tend to gravitate to in your work?

SPOZ: I’m drawn to social commentary and politics quite a bit. Being a loony lefty makes me a smidge angry with seeing all the shit that goes on and has been going on for generations. I also write a lot for children and sneak a few nuggets of lefty wisdom in some of that too. Oh…and toilet themes too.

HCE: What messages(s) do you hope readers take away from your collection Sometimes Angry?

SPOZ: I don’t know really! They’ll probably guess that I get angry about shit. I guess I hope that they take action rather than just adding their names to petitions…which is an action in itself, I suppose. But do it with a smile! I hope people like it anyway. They can take as much or as little as they like from it!

HCE: Is it just as popular now for punk gigs to involve a poetry act like in the eighties, or has this changed? In what ways were you influenced as a writer/performer by the dub poetry movement and the punk poets from back then?

SPOZ: While the punk movement was going on, I was really into Bowie and the wordsmithery that he was a genius at. I was seduced by the energy of punk, though never really got into the lyrical content at the time. I was too much of a twat really. I loved Motorhead too! I watched The Jam and thought “look at all those horrid National Front skin heads jumping around to their music…not for me!” Isn’t it weird how right-wing goons are still into that!? And The Specials! And The Selecter! They just don’t get it, do they? Thick racist twats. Anyway…I was really late to the party, but I think the notion of poetry at punk gigs is ace. I’ve done it a couple of times…it’s a tough gig! 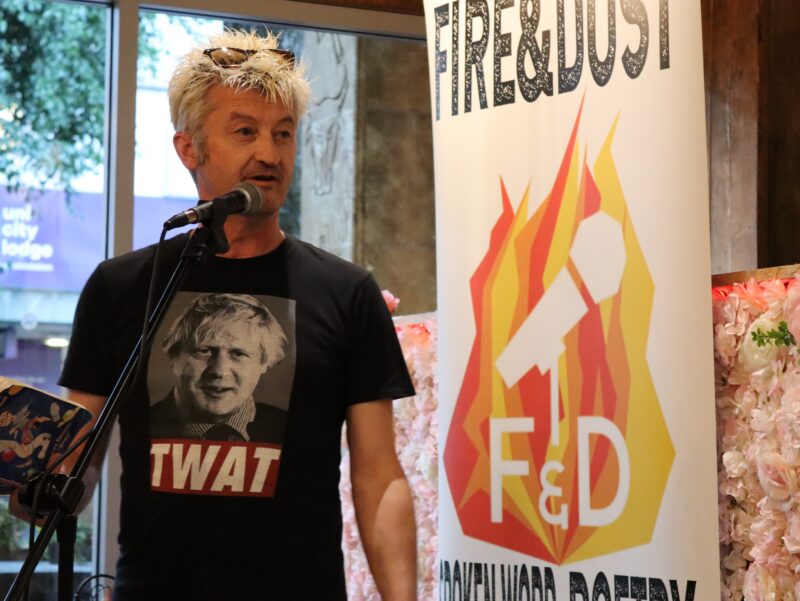 HCE: With punk being a male-dominated scene, do you reckon artists like John Cooper-Clarke, Attila the Stockbroker and Seething Wells performing alongside the bands made poetry more appealing to blokes?

SPOZ: I’m not sure. I reckon it fed a certain desire, not just with blokes, but with people who wanted to soak up that vibe. It was there for everyone, though when you go the Johnny Clarke gigs, there’s always loads of blokes there!

HCE: Punk poetry was overtly political and driven by anger and the desire for social revolution, with less focus on personal testimony compared to today. Do you wish contemporary spoken word poets would be angrier on the mic and strive to be a voice for political change, or can a less direct approach (in terms of the language, imagery, etc.) be equally effective?

SPOZ: I guess they both work for different personalities and social groups. Sometimes, the anger can switch people off (I’ve seen it at some of my gigs) and other times the less direct and more subtle approach can be totally missed by the listener. Whatever way you approach it, it needs to be sustained, because people have short memories, which is why we have another Tory government. Wasn’t Thatcher enough FFS? Democracy is bullshit anyway. Nice idea…just doesn’t work due to the public being so easily manipulated into a fearful and greedy ideology. Meh! 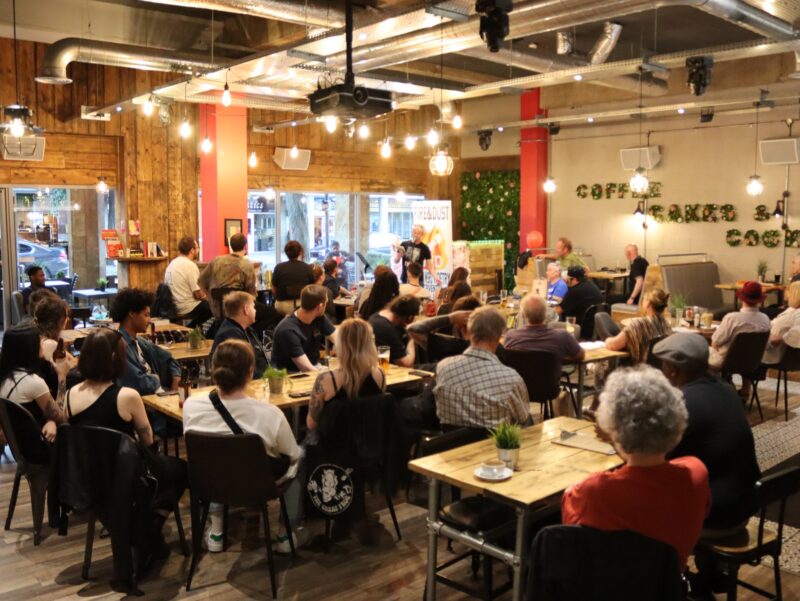 HCE: You’re also the guitarist and vocalist for Bromsgrove punk band Vaseline. What would you say are the main differences between creating a punk song and a poem for performance?

SPOZ: We just do covers with Vaseline, we’re a fun time nostalgia band! I have, however, written and recorded an album of original stuff in my bedroom. Mainly punk with one dubby tune with Dreadlockalien doing the vocal and a ska tune too. I play bass and guitar and my son programs the drums…he’s a bit good like that! The difference between song writing and poem writing is the structure and meter. Poems aren’t as restrictive with regard to form…you can say a lot more. Depending on the form. I guess you have to be a bit more direct with song lyrics. Or not. How was that for not answering the question?!

HCE: You do a lot of good work with kids and schools. Many of us have negative memories of encountering poetry in the classroom, as it’s often taught in a manner that frustrates young people and provokes a life-long repulsion. How easy do you find it to get them interested in writing and reading poems – is the performance element of slams a key factor?

SPOZ: It’s still a lot like that! Teachers are given such a difficult task by virtue of some of the poems they’re made to teach. It happens in secondary schools. The vibe I get in primary schools is that they’re still encouraged to be creative, though this is stifled by the Tory curriculum and their yearning for ‘the classics’.

I have a great time in schools. I absolutely adore my job…especially with primary schools. I guess my personality helps a bit. Too many adults are self-conscious around children and that can be a problem. I like to prat around with them…sometimes I’m the biggest kid in the room. Poetry slams have been a great ‘in’ with some older students. There’s a real appetite for it, which is great.

HCE: Talk us through your writing/editing process a little. Do you have different versions of your work ‘for the stage’ and ‘for the page’, or are there techniques to ensure a poem will engage audiences equally well in either context?

SPOZ: I write for the stage and that’s how I edit too. I’ll read my work out aloud and edit accordingly. To be fair, I’ll say stuff out loud as I write it. It’s very rare for me to edit for the page, unless I’m asked to. The spaces and paragraph structures are there to enable the right breath and performance spaces. I use ellipses a lot to create space and tension and I dare say my punctuation is a bit cack. Ho hum! Frankly, I don’t really care what it looks like on the page, as long as it’s tidy.

HCE: What type of poetry do you seek out for personal enjoyment? As a reader/listener, when you engage with another poet’s work, what are you hoping to get out of it?

SPOZ: I’m seeking out good voices! Voices that hook me in and sometimes make me laugh. Michael Franti from Disposable Heroes of Hiphoprisy has an AMAZING voice. So does Chuck D, Johnny Clarke, Attila, John Hegley, Hollie McNish, Polarbear, Elvis McGonagall, Jasmine Gardosi, Evrah Rose…I could go on…and on… You should check them out on YouTube.

HCE: What’s next on the horizon for you? Are you already working on projects/booked for upcoming performances?

SPOZ: I’m still coming down from my bit in the Commonwealth Games opening ceremony to be fair! I do, however, have three big poetry slam projects I’m working on. One for the Verve Poetry Festival in Birmingham, one for Worcestershire schools and another for Gloucestershire schools. I’m also having meetings with The Rep in Birmingham with a view to getting my graphic novel (in poetry form) ‘Canalligator’ onto the stage at some point. It’s all a bit exciting! Watch this space!

SPOZ: Erm…you could always have a butcher’s at my website or have a look at me doing things on YouTube.

HCE: What’s the best way for people to keep connected with you and your work, or contact you for bookings? 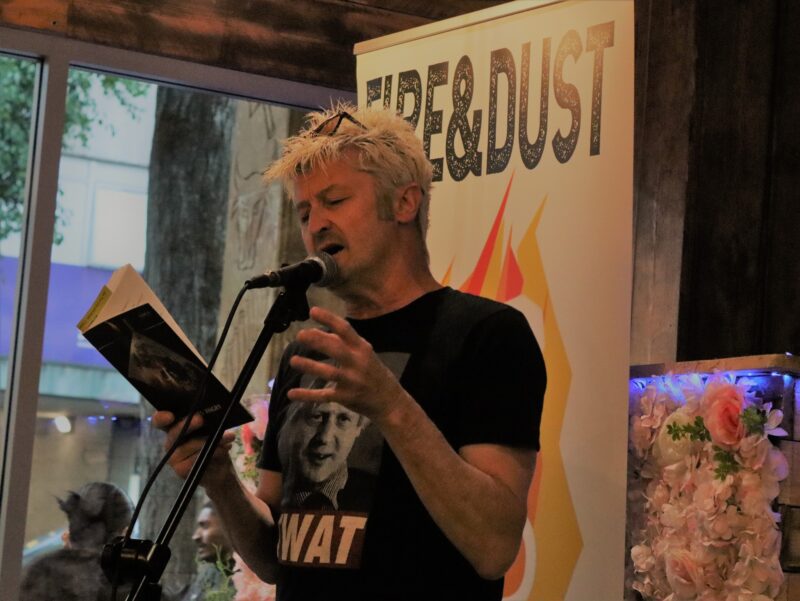 Sometimes Angry can be purchased from Waterstones and other book retailers.