Frankenstein: the Many Faces of a Classic Gothic Horror

The Many Faces of a Classic Gothic Horror:

Whether or not you’re a fan of the horror genre, you’re probably at least somewhat familiar with the story of Frankenstein – a man wishing to play God by bringing the dead back to life with some dire consequences. Mary Shelley’s work became an instant hit despite some controversial opinions, and is regarded a gothic horror classic today. There are countless film adaptations of Frankenstein, as well as contemporary re-tellings, not to mention stage plays, one of which I will be looking into today.

The Royal National Theatre, located in London, is a publicly funded performed arts venue which was founded in 1963. The theatre presents adaptations of Shakespeare, international classical dramas and works of today’s playwrights. Its run of Frankenstein, adapted for stage by Nick Dear, premiered on February 2011 and ran until May 2011. Benedict Cumberbatch and Jonny Lee Miller alternate between the roles of Frankenstein and the Creature. 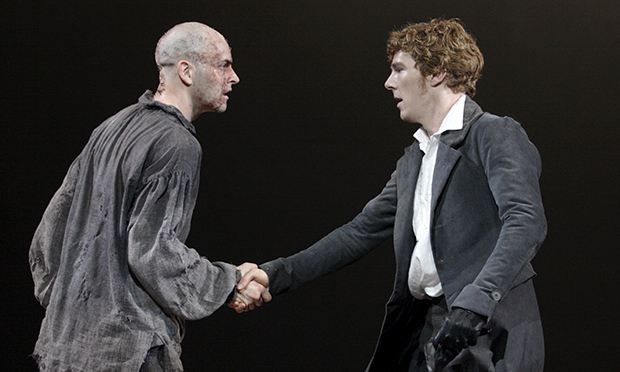 Because of COVID-19, National Theatre made an announcement that it will show some of its plays for free on demand on their official YouTube channel every Thursday, the one downside being that they’re only available for one week after the upload date. Frankenstein was streamed at the beginning of May, which is where the main goal of this article comes in; having watched the play and read the original novel, I’d like to compare the two, discussing what worked for me and what didn’t. The rest of the article is just my personal opinion as taste is subjective. However, I would definitely encourage everyone to check out other plays they are streaming on their channel as, although it’s not the experience of sitting in the theatre experiencing it first hand, it’s definitely better than having no access to a form of theatre at all. Anyway, let’s start now, shall we?

Quick recap of the stage adaptation

The play begins with the Creature being ‘born’, which causes Victor to be disgusted by him, and fleeing the scene. The Creature roams the streets of Ingolstadt, being shunned by anyone he meets, even a prostitute he saved from being assaulted. He finds Victor’s journal the next day and gets beaten by two beggars after trying to take their food.

Afterwards, the Creature comes to care for a married couple, Agatha and Felix, as well as Felix’s blind father De Lacy, who finds the Creature and befriends him, teaching the basics of speaking, reading and writing. The Creature also learns about love and grows a desire for it. Once the married couple discover the Creature, they chase him away, which causes him to lash out and set the cabin on fire, killing the entire family.

This is followed by Elizabeth, Victor’s fiancé, playing hide and seek with Victor’s brother William. The Creature kidnaps and murders William, leaving the notes from Victor’s journal by his body to send a message to his creator.

The Creature wants for Victor to create another one of his kind so they could live somewhere far away together. Frankenstein creates a female, but refuses to bring her to life as the thought of them breeding a new kind of monsters is too repulsive. Because of this, the Creature wows to destroy everything Victor holds dear.

On Victor’s wedding night, he confesses everything to Elizabeth, but it’s too late to salvage the situation as the Creature breaks into the bridal suite and kills her. Frankenstein chases the Creature into the Arctic which brings him to the brink of death. The Creature revives him and the two fade into the fog, with Victor promising to continue his pursuit of the Creature. 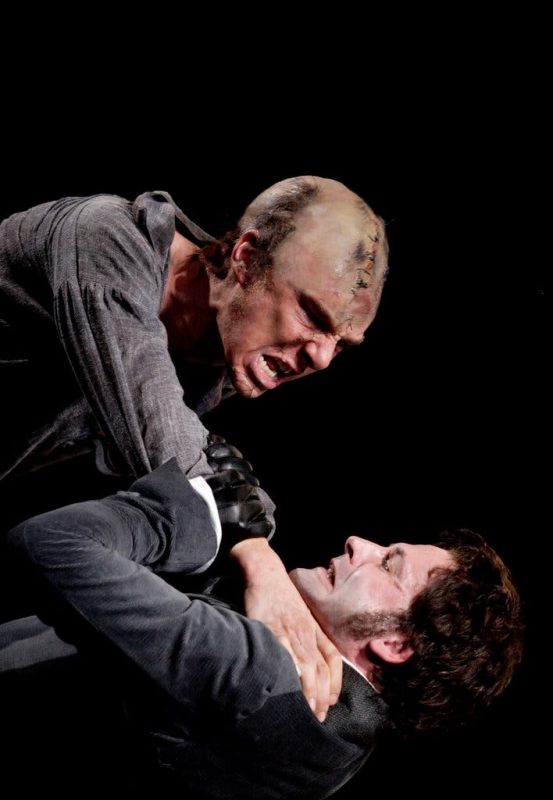 Looking into the differences

Right off the bat, the most obvious difference is the structure of the timeline. In the play, pretty much all of Victor’s backstory is omitted, as well as the character of Captain Robert Walton who narrates the frame story in the novel and who rescues Victor in the Arctic, hearing the entire tragic story as a result.

Instead, the story starts right from the moment the Creature comes to life, with a good thirty minutes of the play dedicated to his perspective. This ties into the chapters of De Lacy, which in the novel were only the Creature’s backstory he shared with Victor. In the stage adaptation, we actually get to witness his relationship with the head of the family first-hand. However, the Creature also notably chooses to kill the De Lacy family after he’s rejected by them in the stage version, which doesn’t happen in the novel.

More examples of characters cut from the play completely are those of Henry Clerval, Victor’s childhood best friend, as well as the character of Justine, William’s nurse. This change leads to William’s murder never being solved in the stage adaptation since, in the novel, Justine takes the blame for it. On the topic of imprisonment, because Clerval isn’t in the story, Victor is never arrested for his murder, which is committed by the Creature in the book. Monsieur Frankenstein also doesn’t die at the end of the play despite his grief for Elizabeth.

One of the most notable differences is that in the stage adaptation, the Creature doesn’t just kill Elizabeth, but also rapes her beforehand, later taunting Victor with the fact. The scene was cut from the play edition which was released on YouTube.

There are also some smaller alterations in the two versions, which don’t differ from the source material too much; such as how long the Creature stays in Geneva before leaving or Victor and Elizabeth being cousins rather than adoptive siblings like in one of the editions of the novel.

I’ll start this off by saying that I think both versions are of their own value and both fit within the medium they were told. Choosing to kick off the story with the Creature’s ‘birth’ could be considered a bold decision narratively, but it gave the audiences a chance to see things from the Creature’s perspective and feel his pain along with the growing resentment towards those who immediately shun him as soon as they see his face.

They also got to witness how the Creature came to understand the basic concepts of humanity through the teachings of De Lacy. If the novel felt completely Victor’s story with the Creature being a background antagonist, the stage version was more dedicated to exploring the innerworkings of the Creature’s mind, trying to explore and possibly understand what drove him to act the way he did, which I think was an interesting direction for the narrative to go in. If anything, it implies that it wasn’t the Creature’s inherent nature which made him commit the crimes he did, but rather the behaviour of other which pushed him to believe he wasn’t made for anything better.

One the other hand, erasing certain characters from the adaptation entirely had a slight detrimental effect to the story for me. Personally, Henry Clerval was my favourite character in the novel alongside Elizabeth. I would’ve loved to see him by Frankenstein’s side, although in a way, him not being present makes sense considering how much of Victor’s background is not in the play.

I also believe Captain Walton was a good mirror of Victor’s obsessive desires, with Victor finally realising the detrimental effect his pursuits had on everything and trying to stop Captain Walton from his mission before he dooms himself and his team. It was a nice bit of characterisation that was missing from the play, especially when one sees Victor’s almost delusional attempt to bring Elizabeth back to life after the Creature’s attack before his father stops him. While it was driven by grief, it also implied that, on some level, Frankenstein still hasn’t learned from his mistakes and thought he could control the situation, like a God he was trying to be by making the Creature in the first place.

The last point I’d like to make is that Nick Dear made a choice for the Creature to become more violent in certain ways. The aforementioned example would be of him killing De Lacy family by burning down the cabin, his first proper expression of violence in the play. Another example, which I personally didn’t like, is Elizabeth’s rape before her murder. While I understand that it was meant to be a portrayal of his urges to feel love and connection with a woman, I didn’t think it was a needed addition to the story and mostly just made me uncomfortable. If that was the author’s intention, he definitely succeeded.

At the end of the day, both the source material and its stage adaptation are great versions of the story in their own right, with the stage play choosing to analyse certain different themes and aspect of the story Mary Shelley intended with her novel. This by no means makes it a bad version, just a different one. One thing is for certain – great are those stories that withstand the test of time and even after almost two hundred years of first being released, Frankenstein is still one of those horror pieces that will sleep under your skin and will leave you wondering long after you close the last page.