Planning to write a script, but not sure yet whether you want the masterpiece you’ll have worked so hard on to be on primetime television or touring theatres? Confused over what these two script formats look like and how they differ? You’re in the right place!

If you’ve got a page of a theatre script and a page of screenplay in front of you – or you’ve seen examples of both – the similarities and differences in regard to their formats may seem a bit obvious, but it can be a difficult question if you’ve never seen a page of either before.

Firstly, look beyond the obvious differences between the mediums of performance, regardless of their script/screenplay format. Simply, one is performed in a theatre in front of a live audience, one is recorded on a TV/film set and is not always in front of a live audience. Based on this difference, the format and content of the two ‘types’ of scripts do hold some similarities. 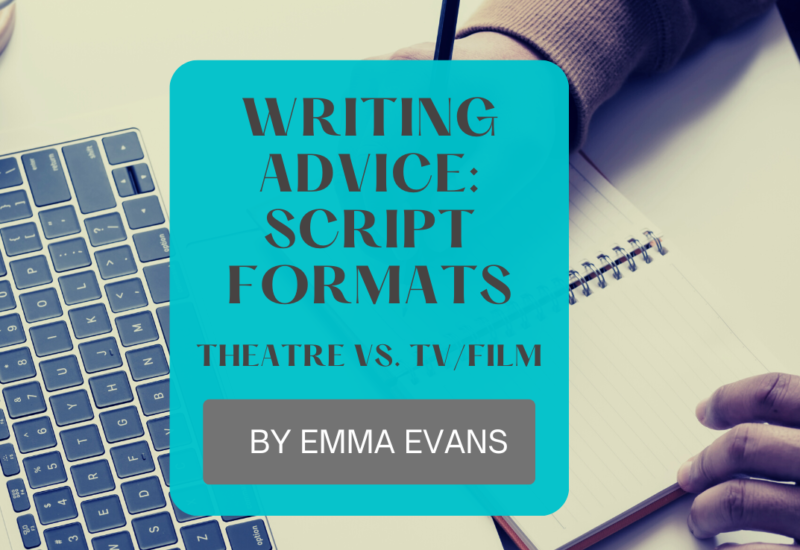 Theatre scripts arguably have a ‘looser’ format. There are still things that make up their format and that still need to be there, though. These include:

Take a look at this rough example below, which is what a theatre script may look like:

There is arguably more of a specific format to these scripts:

Take a look at the rough example: 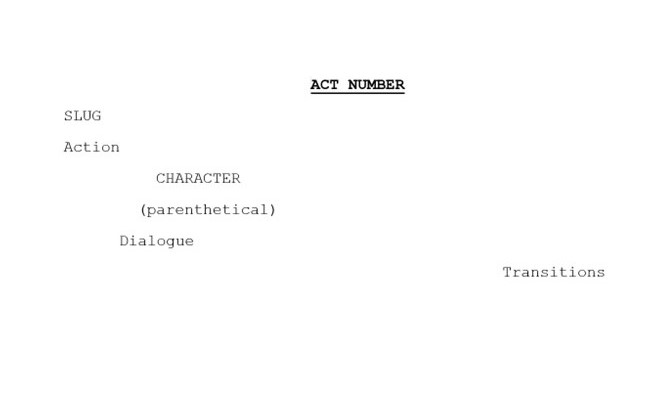 A Note on Script Components:

Some of the script components are pretty self-explanatory in themselves what some of the keywords mean.

Parenthetical: Encapsulates extra direction in a sense, usually occurring while characters are saying a particular line.

Now we have looked at both Theatre script and Screenplay formats, we may be able to pick out the similarities between both script types.

Act Numbers are present at the beginning of a screenplay/ different Acts as well as being used throughout a Theatre Script.

Character, Parenthetical, Dialogue and Action (Stage Direction) are present in both Theatre scripts and Screenplays.

Some of these components are also in the same composition on the page for both scripts (Action and Slug/Act and Scene Number, for instance).

Any inclusion of camera angles in the Action only (usually) is included in Screenplays for TV/Film.

The Slug (Scene Heading) in a screenplay contains more detail on setting of the scene.

Theatre scripts include italics for stage direction, Screenplays do not.

Not everything included in the examples above may be needed in your script/be in the guide you are following or have been asked to follow. Don’t panic! This is just a loose guide to be able to explore the similarities and differences between both forms of script. For instance, parenthetical isn’t used with every line, all of the time, and that’s okay!

Also remember that there are so many tools you can use to help guide you if you get stuck! Reading published scripts can be immensely interesting and helpful.

Whatever form of script you choose, it is clear from the similarities of the scripts that some components are fundamental when writing scripts – remember to use these and get them in the right order!