I could tell you how it feels to hear laughter from downstairs and suddenly the door is locked from the outside as well.

I could tell you that it works.

This is my artwork

It is sloppy, needs more improvement, and I will spend 5 minutes arguing with Mr Bassett about why I prefer it in monochrome.

Sometimes I don’t know how to engage in colours

Sometimes colours distract me from form.

And he tells me that something is missing and I tell him that that’s the point.

I stick down another piece of penne

There’s no point in crying over it.” 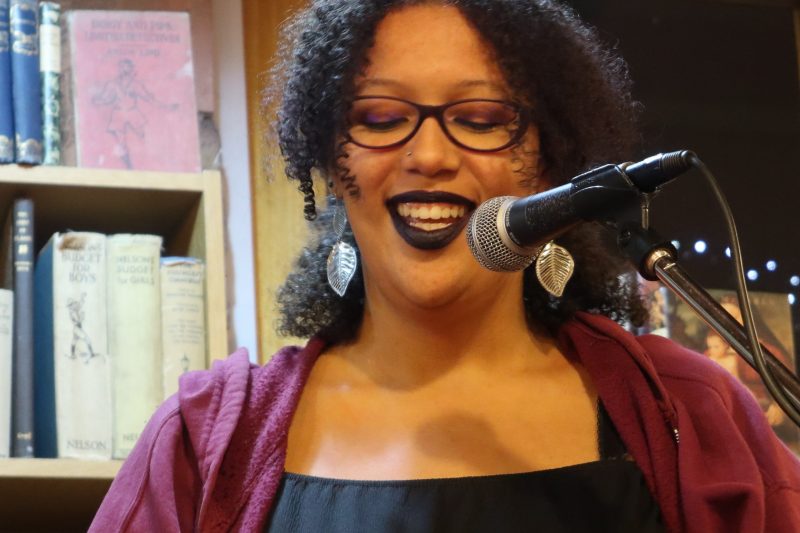 In October 2016, Nyanda Foday became the 11th Birmingham Young Poet Laureate, a respected post that lasts two years. She has also worked with Beatfreaks, organising and performing at Beatfreak poetry events, and working to promote them. A regular at gigs across the city, Nyanda describes herself as inspired by the impact that words can have, and aiming to use words to explore the world and connect with others. Fire & Dust were honoured to host this poet at the start of 2019, for her final Laureate appearance.

We caught up with our special guest after the gig, to ask a few questions…

What first inspired you to start writing and performing poetry?

I started writing from a very young age, because I grew up reading and I feel like the two go hand in hand. With regards to poetry, I sort of switched from primarily writing prose to primarily writing poetry when I was in secondary school and just didn’t have as much spare time. I write poems rather quickly, so it was a more accessible form of writing for me. Then, as I got older, I found that I started using poetry more as a form of emotional release and that was when I started to properly write and perform.

Are there recurring themes in your work?

When I started writing, it was all very angry and about injustice. But since then it’s become crazy emotive, deeply personal and generally quite miserable. Since I started uni, I’ve written a lot about isolation and stress, and have had to make an active effort to not just write the same poem over and over again. In really specific terms, I find that I use the same phrases in several poems, for example I have a whole bunch of poems where I talk about thoughts or emotions ‘ricocheting off the walls of my skull’. It’s weird, but I kind of just let it happen, because I try not to judge my poems as anything but a snapshot of how I’m feeling at the time I write them.

Who is your work aimed at – do you have an audience in mind when you’re putting a poem together?

I like to describe myself as a selfish poet. I write my poetry very much for me, and I love to share it, but I will also write in things that I don’t expect other people to understand because they only make sense to me. I tend to write poetry to release what I’m feeling rather than to help someone understand what I’m feeling.

When you write a poem, would you say you write purely for performance, or is it sometimes more ‘for the page’?

The way that words sound together is really important to me when I’m writing poetry, so despite not writing for the purpose of performing it to others, it’s written to ‘sound right’. So I would say I don’t write ‘page poetry’, and I think the best way to understand my poetry is to read it out loud, especially if it’s read by me or poets with a similar style, because there’s a lot of important rhythmic aspects to how the poem works in my head.

Did you enjoy being Birmingham Young Poet Laureate, and what sort of things did it involve?

It had really high highs and really low lows. I’m so grateful for the experience and would 100% do it again, but I also ended up doing far too much and sometimes feeling very out of my depth. I got to perform alongside some amazing poets, like Raymond Antrobus and Kaveh Akbar, and do amazing events like National Holocaust Memorial Day, which was an incredible honour.

Who are some of your favourite poets, and which collections/performers have recently made an impression on you?

The Birmingham scene is full of incredible poets and I was lucky enough to ‘grow up’ with them in my poetry ‘career’. The list of poets is honestly endless, and I have always been more inspired by poets that I saw regularly than the kind of poets whose poetry you learn about in school. The names I’ll share are some poets that I know personally who have been published, that way Coventry poets can easily access them? That feels like a fair way to cut down the list, but it also feels like a disservice to so many of my friends. So, the names I would recommend searching are: Nafeesa Hamid, Leon Priestnall, Amerah Saleh, and Casey Bailey.

We enjoyed your Fire & Dust set. It’s clear from how you express yourself that you’re passionate about each poem’s subject. Sometimes beginner poets struggle to make their poems relatable for audiences when exploring personal topics – any tips on getting the balance right?

I think the first step is to work out if you wanna write the poem to perform it or write it to work out how you feel about it. In the beginning, it can be a lot easier to write it knowing you’re going to perform it so you don’t finish the poem and then start editing out things you’re uncomfortable sharing, because that will chop it up and make it feel less genuine. In terms of making the poem relatable, one of the ideas I live by is that enough lives have been lived that you are (largely) never going to be the first person to experience an emotion or a situation, which means that your situation is probably going to naturally be far more relatable than you expect. If you’re pretty sure that no one in the room will be able to relate, lean more on your emotions, because emotions are universal, and someone doesn’t have to have felt loss for the same reason you did for your loss to resonate with them.

What poetry events do you recommend in Birmingham, for a) nervous newbies and b) gig veterans?

Everyone should go to Poetry Jam. In my opinion, it’s the heart of the poetry scene (though not everyone would agree), and that is where you will hear about other nights and can work out which ones are going to suit you best. It’s an open mic night and will have poets of all abilities and styles, so you really get the full range. When I was in Birmingham, I would go to this night, Howl, and Stirchley Speaks, but there are so many more nights that people really love, hence my suggestion to use Poetry Jam as a gateway event. It’s really popular, so if you want to perform, get there well in advance, but I generally prefer to watch a night run before I perform at one where possible, because each night has its own feel.

You’re now in your second year of university. Have you managed to find time to write alongside your studies? Are there opportunities for students to engage with poetry in new ways, such as through a creative writing society?

I write a lot at night and when I’m travelling, though that’s kind of how I’ve always written. There is a creative writing society at the uni but I don’t really engage in it, just because it feels like I’m in quite a different place in my poetry to a lot of the other poets at the uni –  but that could just be that I’m just not hearing the right people. 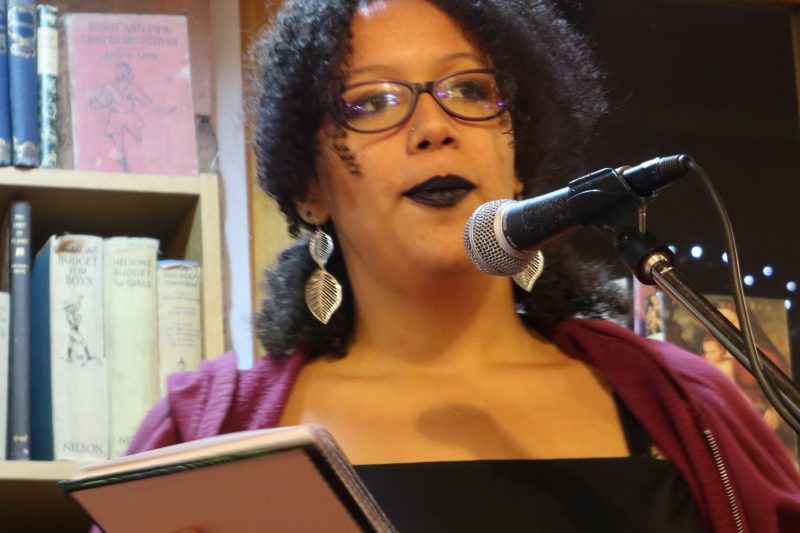 Do you have plans to keep performing poetry across 2019?

I have nothing in my calendar at the moment, and I’m not adverse to performing, but not doing much to actively seek it out. I’m sort of in a recovery period after the laureateship, but I’m pretty sure it won’t be long till I’m itching for performance, so I’ll probably be making the most of the Manchester scene before the year’s through.

Time to plug some links/social media:

My twitter is @NyandaIsAPoet, which is a really good way to reach me if you want to either talk to me about performance, or just discuss poetry.