YEAR OF FIRE AND ASH BY J. E. ALLEN

Poet and novelist Josephine Allen is originally from Nuneaton but “currently resides in Melton Mowbray with all the pork pies and stilton cheese”. She used to be a regular attendee of HCE’s poetry night – Fire & Dust – and has given live performances of her work at various other events in the UK. Her poems and short stories have been published in magazines like Paper and Ink, Pour Vida, Glove and, of course, HCE magazine.

On 3rd May 2018, Josephine returned to Fire & Dust as one of our headliners. We caught up with her after the gig, to ask a few questions…

When did you first know you wanted to be a writer?

I was always a big reader. When I was a kid I would take 11 books (the most you were allowed to take) out of the library and read them all before going back for more. I love stories and creating pictures with words. I would always write pages and pages whenever we were asked to write stories (hopefully I have since learnt to produce quality over quantity!). Then I wrote a poem for a rotary club competition when I was about eleven and it won, and I thought I might actually be good at this! I think I have been writing ever since.

Do you write your poems purely for the page, or always with performance in mind as well?

I have been performing my poetry for almost 10 years now so I think everything I write is partly based on how it sounds out loud. In some ways that it is just because the poetry is like my inner monologue so it’s always going to sound like my voice and the other part of it is editing. Once I have written something I leave it, go back to it later and think it’s good, but it would sound better if I swapped one word for another for assonance; or sometimes it’s about the rhythm of the line and I need to lose a syllable to make it fit. Even on the page it’s there to be read and someone is hearing it in their head, in their voice, which is pretty cool.

Would you say your work has any recurring themes?

My work has strong feminist themes, which definitely reoccur. I also write about the body a lot: skin and flesh are such evocative words with so many undertones and connotations and I am drawn to them. Yet it’s hard to analyse your own work in this way. It’s easy to over think it and become bogged down in it all. I would be interested to know if anyone at the gig had any opinions as to this question.

You often explore emotive and kind-of controversial subjects, things that require you to be vulnerable on-stage. When you started out, were you nervous about sharing this type of poetry with a live audience?

Absolutely I was nervous, but these are my poems; they come from my life and my experiences and I don’t know how to write any other way. Also, I have had the great fortune to come up reading my poetry in Coventry amongst some fantastic and supportive writers. People who weren’t afraid to deal with politics and conflict (like one of next month’s Fire & Dust headliners, Antony Owen), as well as love and sex. Poetry is a medium that can run the gamut of the human experience. 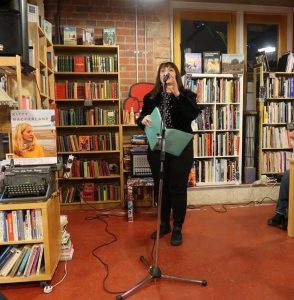 Yes, I have worried that I am not qualified to speak about politics or that I’ll get dismissed as a woman who writes about sex and that whole Madonna/whore rabbit-hole of stigmatisation and sexualisation. But no one is going to give you permission or tell you that you know enough now, you just start and do it. Sometimes you’ll get a snort of laughter or a hmm during a poem and you know they get it; I love that. Other times you will miss the mark and hear only the sound of polite, but indifferent, applause. That’s pretty much the worst it gets as there’s no one lobbing custard pies or booing. I like the idea that maybe now there are other people writing their own brave poems, because they heard me read mine. That’s what nights like Fire & Dust can achieve.

How often do you write a poem, and do you have a writing routine?

Sometimes it is months between poems. Other times I will write a few within a couple of days. Inspiration can be a pesky critter. I usually have some sort of notebook on the go, as well as notes in my phone and my laptop. That way if a thought occurs to me I can jot it down. Not every line is a winner, but I like to keep things, as sometimes I go back later and find a phrase or an image I like and use it for something else. I think of it as notebook mining.

Sometimes, though, I will write something in one go, all at once and, apart from the odd tweak, it remains as is.

Usually, I write in my room, sat cross-legged in my bed with my back against the padded headboard, tapping away on my computer keys. I used to write late at night, but when you’re working a full-time job, as well, that’s not always tenable. Also, I like it to be quiet so woe betide anyone that interrupts me mid flow…

You took a year out to work on your novel Year of Fire and Ash, which was released last year. Some people struggle to ever get their books finished. Did you encounter much writer’s block/procrastination?

Procrastination is my middle name…well actually, as you’ll find the book on Amazon under J.E. Allen, it’s Emily, but, I swear, I never did as much tidying and sorting than when trying to avoid writing during that period. However, there was one thing I did after writing myself into a corner that seemed to help. I wrote down questions about the characters and what was going to happen next and made myself answer them. It didn’t always end up in the final book, but it usually got me to the next chapter at which point the story would unfold bit by bit. It’s a fantasy adventure novel, with some political intrigue and a love story or two thrown in for good measure. I was told by a reader that they stayed up into the small hours reading, because they needed to know what would happen next, and that to me is the best compliment you could ask for.

You’ve been greatly missed at Fire & Dust. But we hear Leicester has a healthy poetry scene. Which regular gigs in Leicester would you recommend for
a) nervous newbies and
b) open mic veterans?

I have really missed Fire & Dust, it’s an exceedingly special event and I’ve been so inspired by you all over the years. I actually haven’t been to any Leicester nights yet, but, as an East Midlander now, I have been to Crosswords in Nottingham, which I recommend for any nervous newbies because they are very welcoming. I also love the two excellent nights in Derby (great for vets and newbies alike): Word Wise and She Speaks, both of which have given me featured spots and are supporting some strong, innovative voices.

How was your recent experience of performing at Fire & Dust?

Let me first say, the audience were fantastic as ever and it was brilliant to see so many people coming to a poetry night. There was a great mix of voices performing and I especially enjoyed Alice’s set. I felt really welcomed back and it was great to share some of my new work as well as some of the pieces I developed as a regular. It’s always a different experience performing a longer set than just doing a couple of poems. I’d highly recommend it, if you get the chance, as it makes you look at your work in a different way. As you mentioned, my work can be challenging in theme, but everyone was very receptive. I do and will continue to recommend Fire & Dust, HCE and Silhouette Press to all the poets and poetry fans I meet.

Read any new poetry collections lately? Who are some of your favourite writers?

I have been reading some Helen Dunmore, lately, she is one of my favourite writers and poets, but sadly passed away last year. She’s the queen of imagery and the human experience.

Also, Everyone Knows I am a Haunting by Shivanee Ramlochan, a Trinidadian poet whom I met ar Derby Poetry Festival. This really is a tour de force and I recommend it highly. Its darker themes and rich images make it a must.

As a fantasy writer I will also recommend Claire North, as her books are going from strength to strength. Most recently, I read The End of The Day, which really captured the uncertain climate of the world we all find ourselves adrift amidst.

Any social media/website links you’d like to promote to our readers? 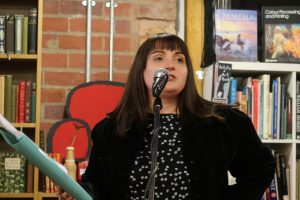