HCE received a lot of high-quality submissions for The Brutal Issue – sadly, too many to fit inside the magazine! So we offered some of our shortlisted contributors the chance to be published on our website.

Keep an eye on our social media for more great writing like this, in the run up to the release of The Brutal Issue…

“Brutalism tries to face up to a mass-production society, and drag a rough poetry out of the confused and powerful forces which are at work. Up to now Brutalism has been discussed stylistically, whereas its essence is ethical.” 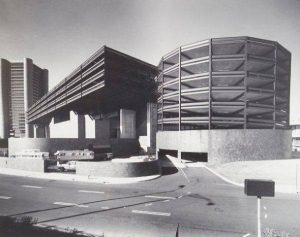 I confess I had a pre-teen phase during which I listened quite earnestly to boy band music. In the waning year of this period, I begged my parents to let me go to one of a group’s local concerts and they agreed, reluctantly. My best friend and I were dropped off, so we didn’t get to ascend the quarter-mile spiral ramp leading to the parking garage built over the arena. But from the street we certainly looked up at the imposing structure, noticing how it loomed over several city blocks like a concrete mattress propped on cinder blocks.

The venue seemed somehow incongruous for the event, like holding a teddy bear convention in the Death Star. It took some time to learn that ‘Brutalist’, in the context of architecture, does not derive from ‘brutal’, but rather the French brut, meaning ‘raw’. There was nothing raw or bare about the boy band’s performance; even the a cappella felt manufactured. Ten years after that concert – at the zenith of prefabricated pop – the Coliseum imploded in a ballooning cloud of dust. I like to think the city ordered the Coliseum demolished because they could find no worthy acts to play the venue. 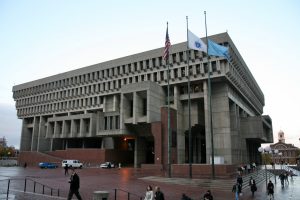 So much of time at university is spent trying to be liked: by peers, by potential paramours, by professors. At my college in a tiny town in western Massachusetts, I often felt I was earning an unofficial degree in learning to please. It was a revelation, then, to stumble across Boston City Hall on a weekend excursion. Cities always attract tourists with their beautiful, historic, appealing faces; it’s only when you live in the vicinity that you discover the brash, don’t-give-a-damn undercurrent. Here was a building deemed so aesthetically unpleasing that mayors had campaigned on promises to tear it down.

It seems fitting that Boston’s unabashed monument to je m’en foutisme is its City Hall. This behemoth, rising like an inverted pyramid, is the anti-tourist building: a building you would not need to enter unless you worked there or lived in the city and needed administrative assistance. Its neat rows of windows are aligned like a set of bared teeth. The building confronts passerby with a lesson you cannot look away from: who cares if people like you?

The Met Breuer, formerly the Whitney Museum of American Art 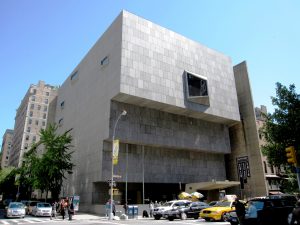 I went on a date here once, to a Buckminster Fuller retrospective. I was moved more by the building’s sturdy rectangular spaces than the fanciful designs of geodesic domes. The latter seemed obsessive attempts to replicate the contours of our Earth rather than the actual spaces in which people live.

Incidentally, the relationship didn’t last, and neither did my love affair with New York City. 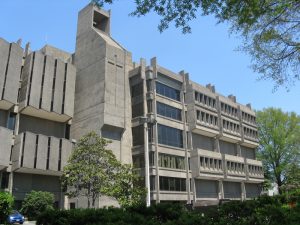 DC is a Brutalist paradise, in both the architectural and layman senses. I collected concrete evidence of this fact on every day of my time in the city: admiring the vast structures moored on Constitution and Independence Avenues, watching politicians and lobbyists do violence to the ideals for which those streets were named.

Brutalism’s appeal to government institutions is obvious. The buildings are unshowy and not elitist, which makes taxpayers feel their money is going toward the functions being performed within the walls. And the design of the Metro system – dim, cavernous, rife with rectangles – is beloved, perhaps because the public can only appreciate rawness when it resides in the guts of a city, hidden on the inside.

But Brutalism’s appeal to institutions of higher education is less obvious, given that Le Corbusier and other prominent Modernist precursors – Mies van der Rohe, Frank Lloyd Wright – were autodidacts. Is it not ironic for a university to design its library using a style envisioned by a group of self-taught architects? And indeed, I spent quite a few nights in the basement of the Georgetown library querying the utility of graduate education. Wondering what the world might teach us if we were better observers, if we could only learn to see beauty in ordinary materials. 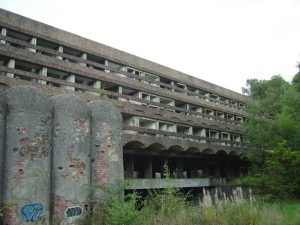 One damp evening my partner and I were dropped off at the edge of tangled woods and handed glowing walking sticks as our only aid against the darkness. After several minutes of guided stumbling, we encountered St. Peter’s Seminary, a hulking structure left to the elements since the eighties. On this night, temporarily reanimated by an audiovisual installation, the building gained a cathedral-like presence. We walked slowly through the grounds, weaving seamlessly in and out of the concrete skeleton and waving our lights in dark corners, illuminating the usual signs of ruin (graffiti, trash, puddles) as if they were secret messages. The entire experience felt fraught with meaning, like witnessing the raising of Lazarus. Like finally reckoning with the brute power of a building, when you realize even its bones can haunt you. 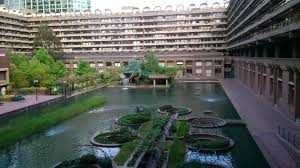 I worked directly across from the Barbican for several years. I ate lunch in the cafeteria staring at the complex’s lush and improbable greenhouse, and sat under harsh fluorescents looking at the warm glow emanating from the stacked residential flats. I got repeatedly lost trying to find shortcuts through the maze of raised walkways. I walked to the office and watched the morning fog dissipate, revealing the Shakespeare Tower’s full and triumphant height.

One afternoon, just before I left London, I finally reached the centre of the labyrinth. I came upon a positively utopic scene: the sun was uncharacteristically shining and the walls radiated warmth. A large pond straddled the courtyard, inset with floating islands of verdant greenery. A few swans were puttering between ecstatic fountains. I sat on a bench, cradled by concrete and suddenly unhurried, thinking: all this time this has been here and I never knew.

NINA SUDHAKAR is a writer and lawyer currently based in Indianapolis. Her work is forthcoming or has appeared in Litro and Arcturus; for more, please see www.ninasudhakar.com.